Constitutionally, Seanad can start operating only when new government is in place 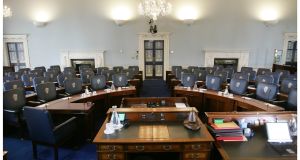 No legislation can be passed by the Oireachtas once the incoming Seanad is elected until a new government is formed, it has emerged.

The new Dáil and outgoing Seanad are empowered to pass legislation and will sit on Thursday and Friday to deal with the emergency Social Welfare Bill and any prepared public health-related urgent measures.

But senior government sources have said the incoming Seanad, which will be elected in the week after March 30th, cannot sit until 11 nominees appointed by a new taoiseach are in place. Under the legislation, outgoing Taoiseach Leo Varadkar is not empowered to choose them, sources said.

If any further emergency measures are required after March 30th to deal with the Covid-19 crisis, they cannot be passed without the Seanad, and constitutionally it can only start operating if a new government is in place.

Talks between Fine Gael and Fianna Fáil are scheduled to take place on Wednesday, Thursday and Friday and are seen as increasingly urgent because of coronavirus, but the inability of the Oireachtas to pass legislation from next month will put further pressure on political parties.

A Seanad analyst said “the outgoing Taoiseach doesn’t have the authority to nominate the 11”.

It is the practice that after 43 Senators on the five vocational panels and six Senators on the university panels are selected, the incoming Taoiseach nominates 11 others to bring the Upper House to the required 60 seats. Once they are in place, the Seanad sits for the first time, when it can commence debate on any legislation for consideration.

For a Bill to be passed, it must have the approval of both the Dáil and Seanad.

The Taoiseach’s 11 nominees can help a government to maintain a majority, and in coalition the participating parties also get to nominate appointees. Independent members are also appointed to reflect particular interests, although governing parties often appoint former TDs.

According to a strict legal timetable, ballot papers will be issued by registered post on Monday at 9am to the electorate for the five vocational panels, and the poll closes at 11 am on Monday, March 30th, with counting commencing the same day.

Counting is done one panel at a time, and with five panels to elect – administrative (seven seats), agricultural (11 seats), cultural and educational (five seats), industrial and commercial (nine seats) and labour (11 seats) – it takes about a week to complete.

The electorate for the 43 seats on the vocational panels is 1,161 – the 160 TDs in the new Dáil, the 60 outgoing Senators and 941 city and county councillors on the electoral register.

Ballot papers were issued by registered post on February 28th to graduates of NUI and the University of Dublin (Trinity College), just under 200,000, who elect six Senators. The poll closes at 11am on March 31st, when counting commences, which usually takes two to three days.

Last week, following the Taoiseach’s announcement of major closures and the need for social distancing, all Seanad candidates were forced to cancel face-to-face canvassing and restrict contact to phone and email. Unlike the Dáil election, which is constituency based, the Seanad campaign is a national campaign, and candidates drive thousands of kilometres around the country to meet and canvass councillors.