‘Working majority’ needed, says Varadkar as FG and FF edge closer to accord 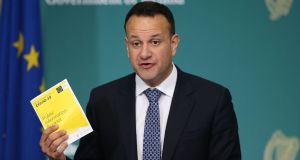 Taoiseach Leo Varadkar: In the midst of the coronavirus crisis, Fine Gael and Fianna Fáil accept they need to agree a programme for government. Photograph: Nick Bradshaw

Fine Gael and Fianna Fáil have reported a breakthrough in talks on a new government, with both sides expecting negotiations on a new administration to accelerate in the coming weeks.

In an agreed statement issued by both parties on Wedesday night, they said they had a “productive meeting” that afternoon and agreed the “need to form a strong, stable government that will help Ireland recover post Covid-19”.

“They are working to develop a programme for government that provides stability and majority support in the Dáil,” the statement said.

This is the first mention of a programme for government – the key agreed document that would underpin any new administration – after weeks of talks and was regarded by both sides as a breakthrough, sources said on Wednesday night.

But the Green Party signalled clearly again on Wednesday that it would not be involved in any coalition with Fine Gael and Fianna Fáil, meaning that other small parties or a large number of Independent TDs will be required if any new administration is to have a majority in the Dáil.

Both Fine Gael and Fianna Fáil believe that a new government must have a sustainable Dáil majority if it is to last.

Speaking at a press conference in Government Buildings, Taoiseach Leo Varadkar stressed that any new government needed a “working majority”.

“I think we need a government that’s going to last, that will last till 2024 and 2025. It’s going to need a working majority, and that means it’s going to require more than Fianna Fáil and Fine Gael.”

Mr Varadkar said that Fianna Fáil and Fine Gael would need “at least 10 more TDs . . . to take the whip, stay the course, be willing to make the tough decisions as well as the popular ones for the next four years.”

While the coronavirus crisis means the Dáil is unlikely to vote on any new government for some weeks, both parties now accept they need to agree a programme for government and establish a new administration. Because the current Seanad leaves office this weekend – and the new Seanad cannot be completed until there is a new taoiseach to make his 11 nominations to it – the Government cannot pass any more legislation through the Oireachtas after this week.

This constitutional roadblock has “focused minds” in the two parties, sources said.