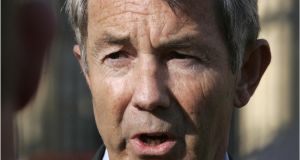 Michael Lowry: “If anyone steps into government, they are stepping in knowing difficult decisions will have to be made.” Photographer: Dara Mac Dónaill

The Regional Independent Group comprising nine non-aligned TDs has emerged as the most likely target for Fianna Fáil and Fine Gael as partners in coalition.

However, members of the group have said privately they would be reluctant to enter coalition with the two larger parties without another smaller political party on board. They expressed concern that the numbers would not be sufficient to guarantee a stable government that could last a full term.

Fianna Fáil has 37 TDs in the 33rd Dáil, while Fine Gael has 35, giving them a total of 72. The nine members of the regional group would take the numbers to 81, a slim majority. There are 160 TDs.

“We need another party to participate,” said a member of the group who spoke on condition of anonymity. “That would be a red line for us. Without a party on board, Independents would have no cover. Opposition parties could identify the most vulnerable Independents in their own constituency.”

The Regional Group has maintained ongoing contact with the two larger parties since the start of the Covid-19 crisis. Asked if a second group of Independents would suffice, the Regional Group TD said it would not.

“What’s critical for us is stability. It’s not in our interest to facilitate a government that would last only months, or a year or two.”

The group is the largest of three Independent groups in the current Dáil.

Mattie McGrath of the Rural Group of six TDs said that it had not spoken to any party in the past 20 days ,but was still exploring options.

The Independent Group also has six TDS, but only three of its number – Michael Fitzmaurice, Michael McNamara and Marian Harkin – have expressed interest in government formation.

Mr Fitzmaurice has submitted a policy paper to the parties outlining a large number of priorities, including issues pertaining to his home region of the west of Ireland.

All of the smaller parties have ruled out participating in a Fine Gael and Fianna Fáil coalition. However, some feel there is a sense that the Labour Party might review its current position following the outcome of its leadership contest in early April

There were no talks held between Fianna Fáil and Fine Gael om Thursday, but both parties have said they were pleased with the progress of negotiations on Wednesday.

A spokesman for Verona Murphy, a member of the Regional Independent Group, said the Wexford TD, who was previously a Fine Gael election candidate, would have no problem with Taoiseach Leo Varadkar remaining in place for the duration of the current crisis.

“In reality the man leading the country is [the State’s chief medical officer] Dr Tony Holohan, and all parties and Independents are supporting the actions being taken by the CMO at the moment.”

The spokesman said Ms Murphy also believes that in any negotiations Fine Gael and Fianna Fáil should first agree a policy document with each other before approaching Independents.

This point was also made by Independent Tipperary TD Michael Lowry, another member of the Regional Independent Group, who also said that those who enter government must be ready to make tough decisions and then stick to them.

“When they have that done, they will present it to us for input,” Mr Lowry said of the two parties.

“If anyone steps into government, they are stepping in knowing difficult decisions will have to be made,” said Mr Lowry, who has supported numerous governments in the past. “Hard times are ahead.”

He said nobody participating in government would be making excessive demands, and said most knew it was a time to help the country recover and stabilise.