When the new normal wasn’t that normal 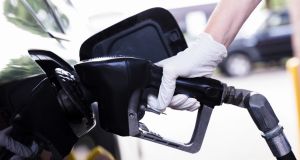 ‘I finally chose a purveyor of petrol whose online identity claimed you could pay at the pump, avoiding unnecessary human interactions.’ Photograph: iStock

Way back before the Bubonic Plague of the 1300s, the Great Famine of the 1840s and the taoiseach’s U-turn on Cromwell’s cabinet, I took my life in my hands and drove into Westport for petrol. It was back in those days when tourists had become an endangered species and the thought of ever drinking a glass of perfectly chilled Viognier with a bowl of moules mariniere in my favourite seafood restaurant seemed like an LSD trip I’d had at Woodstock, except I was too young to go to the legendary festival.

So, armed with plastic gloves, enough sanitiser to clean all the statues that survived the inferno in Notre Dame Cathedral, I drove around the heritage town’s very empty, planned streets for a while – unnoticed by the Fuzz, I think – to stake out the level of traffic on garage forecourts.

This was during those liberated pre-mask days when you were still allowed smile at people – from a respectable social distance – without getting your glasses fogged up.

I do not know how it happened but suddenly the gauge was at €50.01 and the card machine on the pump was telling me to “f**k off” or words to that effect

Anyway, I finally chose a purveyor of petrol whose online identity claimed you could pay for the juice at the pump, avoiding unnecessary human interactions.

Discreetly exiting the front seat of my vehicle and approaching the pump with caution – you never know what super-spreader had been there before me – I started the procedure. Being a pragmatist, I had already planned to stop the purchase five cents before it reached €50, so that my payment interaction would be contactless.

Is it called Sod’s Law? I do not know how it happened but suddenly the gauge was at €50.01 and the card machine on the pump was telling me to “f**k off” or words to that effect.

I kid you not.

What could I do? We were in lockdown, so I couldn’t run for the hills or escape to the nearest ferry port. So, I calmly walked over to the window hatch and awaited the attendance of an assistant. When she finally arrived and I asked to make a card payment, she explained that I would have to go into the shop as it wasn’t a mobile machine.

“Go in to your shop?” I asked with an insane stare.

That means I need to cross the threshold, walk up the chocolate biscuits aisle, turn left and stand in a queue, albeit a short one, I think.

“Brace yourself, Áine, you can do this,” I bravely said to myself.

That was almost five months ago. A lifetime in coronavirus lives lost. It was before “the new normal”: before I fully understood how easily it is to become institutionalised by the comfort of cocooning. It was before I started reading all those column inches about how leaving lockdown is harder than being in lockdown for some of us.

It is no wonder my Mini Madam first granddaughter, Ada, looked at me a little strangely when in mid-July we met in the flesh again and not through a mobile phone screen. Well, she is only nine months old and would be justified in assuming that all grannies were encased in a glass screen; characters, perhaps, in a new interpretation of Samuel Beckett’s play, Endgame.

Allowing her to pull my hair, tug at my earrings and scrunch up her tiny little nose while pretending I was Wilma Flintstone was the best fun I’d had since I entered Alcatraz – the pet name for my self-isolation idyll.

Of course, she didn’t notice how my silvery roots had grown out and how, after years of subterfuge, the cosmetic nature of my blondeness had been exposed because of the lockdown. So much so that my next courageous step back into the big bad world was a visit to my hairdressers where I had my temperature taken, my traumatised locks examined and the decision to gradually make the transition to an au naturale barnet. Well, I suppose the new normal means it is time to start acting my age.