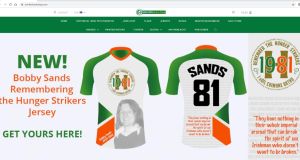 The site is currently promoting “Bobby Sands: Remember the Hunger Strikers” jerseys featuring the number 81 on the back

The Sinn Féin company involved in the sale of republican memorabilia and occasional publications laid off its staff last year, according to accounts just filed.

The accounts show Republican Merchandising Ltd had no staff by the end of 2018, having had three the previous year.

At the end of 2018 the company had accumulated losses of €88,543, and was dependent on financial support from Sinn Féin for its continued survival.

“Trading conditions during the year were difficult,” the directors said in their report accompanying the accounts. “There are no changes in business practices planned at present.”

Rising costs and “changing consumer tastes” were a threat to the business, they said.

The company operates a shop on Parnell Square, Dublin, and it sells online. It ceased the sale of T-shirts and other items celebrating the Provisional IRA last year.

At the end of the year the company owed €85,879 to Sinn Féin. “Sinn Féin has indicated that it will not seek repayment of this amount until such time as the company is in a position to do so.”

The website, sinnfeinbookshop.com, sells books, clothing, badges and other items associated with the IRA, Sinn Féin and Irish unity.

The site is currently promoting “Bobby Sands: Remember the Hunger Strikers” jerseys featuring the number 81 on the back. Mr Sands died in 1981.

A limited edition Martin McGuinness print is available for €600, while Loughgall Martyrs and Easter lily badges are €4.99.

Administrative costs were down sharply, falling to €48,363 from €151,343 the previous year, largely explained by the laying-off of staff.

The company’s directors are Brian Dowling, who replaced Pat Finlay in February last year, and Treasa Quinn, who is Sinn Féin’s “appropriate officer” for its financial filings to the Standards in Public Office Commission.

Ms Quinn and Mr Dowling are also the directors of Parnell Publications CLG, the company that used to publish An Phoblacht, which is also based at 58 Parnell Square West.

The print edition of the publication ceased in early 2018. The party now runs an online version as well as publishing an occasional magazine-format version with a €5 cover price.

Mr Dowling and Ms Quinn are also directors of a company called Ireland Commemorations Company, set up to run a 1916 commemoration exhibition at the former Ambassador cinema at the top of O’Connell Street in Dublin.

The company had accumulated losses of €122,823 at the end of 2018. It owed €19,899 to Sinn Féin, and €109,494 to Friends of Sinn Féin, the US-based fund-raising arm of the party. Under Irish law, funds raised abroad cannot be used to support party-political activity.

Earlier this year it emerged that an English man, William Hampton, had left €1.6 million in his will to the “political party in the Republic of Ireland known at this time as Sinn Féin”.

Sinn Féin has said the money is to go to the party in Northern Ireland.

A request for a comment from the party met with no response.