Johnson slips in polls as pressure over police call-out mounts 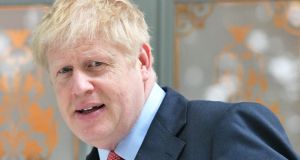 Boris Johnson refused to answer questions about a domestic incident at a Conservative leadership hustings in Birmingham on Saturday. The story has revived questions about his character. Photograph: Dominic Lipinski

Conservative leadership frontrunner Boris Johnson is under growing pressure to explain why police were called to a flat he shares with his girlfriend, as polls show his lead over Jeremy Hunt shrinking. Mr Hunt said on Sunday that “what happens in people’s personal lives is really a matter for them” but he criticised Mr Johnson for avoiding scrutiny.

“I think someone who wants to be PM should answer questions on everything,” Mr Hunt told Sky News during a visit to Scotland.

“If Boris is refusing to answer questions in the media, refusing to do live debates then of course people are thinking, just who are we going to get as PM?”

Police were called to the south London flat Mr Johnson shares with Carrie Symonds in the early hours of Friday morning after neighbours reported hearing angry shouting and plates smashing.

In a recording of the incident a neighbour gave to the Guardian, a woman is heard shouting “get off me” and “get out of my flat” and screaming.

Police said that after speaking to the two people inside, they were satisfied that both were well and that there was no offence that needed to be investigated.

Mr Johnson refused to answer questions about the incident during a Conservative leadership hustings in Birmingham on Saturday and most of his leading supporters have declined to comment on it. But the story has revived questions about Mr Johnson’s character and former Conservative foreign secretary Malcolm Rifkind said he should explain what happened.

“If you are a candidate to be prime minister and the police have been called to your house – fairly or unfairly – the fact is there was a police visit. You don’t just say ‘no comment’. That implies you may have something you don’t want to disclose,” Sir Malcolm told the BBC.

“It was a lack of judgment to refuse to even make a short comment. All he could have said, quite reasonably, would have been that in all relationships there are occasionally outbursts of anger and disagreement.”

Speaking to Conservative activists in Birmingham on Saturday, Mr Johnson said he would “disaggregate the elements of the otherwise defunct withdrawal agreement”, introducing domestic legislation to protect the rights of EU citizens in Britain and reserving the payment of the £39 billion (€43.6 billion) divorce bill until there was a solution.

“And then of course you solve the problem of free movement of goods across the Irish and Northern Irish and other borders to where they logically belong, and that is in the context of the Free Trade Agreement that we’ll negotiate in the implementation period, after we’ve come out on October 31st,” he said.

A poll for the Mail on Sunday found that Mr Johnson was eight points ahead of Mr Hunt last Thursday but three points behind him on Saturday. Mr Johnson remained ahead among Conservative voters but with his lead shrinking from 27 per cent to 11 per cent between Thursday and Saturday.