Hard border will be target for dissidents, MPs told on visit to North 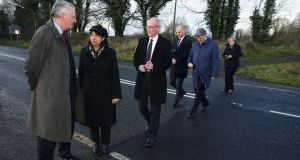 Hilary Benn (left) with Brexit committee members on the Border at Middletown, Co Armagh, during a visit to Northern Ireland on Thursday. Photograph: Brian Lawless/PA Wire

Northern Ireland cannot afford to go back to the days of Border posts, the chairman of the House of Commons Brexit committee has said on a visit to Co Armagh.

Hilary Benn warned that the “clock is ticking” for a resolution to the Border issue and said that a solution must be found to ensure the Northern Ireland peace process is not placed in jeopardy.

“We simply can’t afford to go back to the past. We have got a matter of days to find a way forward on this Border question to enable us to move on to phase two of the talks.

“The clock is ticking,” the Labour MP said.

The Brexit committee travelled to the region on Thursday for a site visit to the village of Middletown where the Border separates Northern Ireland and the Republic.

It is one of 275 land crossings between the two.

Speaking from the Border, Mr Benn said: “We need to find a solution. You just stand here, you see the traffic, the goods moving backwards and forth, you talk to the people who have lived here, who have lived through the Troubles – this is progress, this busy road is progress.

“I really hope the peace process is not in jeopardy.”

This was the first time the committee visited Northern Ireland to gather evidence.

Earlier the committee heard evidence from senior officers from the Police Service of Northern Ireland (PSNI) who warned that Border infrastructures would be an obvious area of attack by dissident republican terrorists.

Addressing the meeting, which was held in Armagh, the PSNI’s Deputy Chief Constable Drew Harris said any infrastructures along the Border would give terror groups “a further rallying call to drive their recruitment”.

Mr Benn said the evidence from the PSNI was clear.

“If you do have a return to physical infrastructure, Border posts, with people having to stand here, people having to be protected, then there is a risk that [the [Border] becomes a target once again.

“We simply can’t afford to go back to the past,” he said.

Mr Benn said a way to avoid a hard border would be for regulatory alignment with the whole of the UK and the EU member states.

“That clearly provides a way forward because it would not be separating out Northern Ireland which is what the DUP object to.

“It could well be a way forward to meet the concerns of the Government of the Republic of Ireland about going backwards in terms of what has been achieved here on this Border.

“I hope that will enable us to make sufficient progress to enter phase two of the talks.”

The committee of MPs was brought to the Border by the chief executive of Cooperation Ireland, Peter Sheridan, a former PSNI assistant chief constable.

Mr Sheridan told them that none of the region’s politicians want a hard border.

“None of our politicians want a hard border. None want to see structures on the Border.

“All of our politicians want to see free movement of people across the Border.

“They don’t want to go back to [structures],” he said.