UK government has no sector-by-sector studies on Brexit impact

David Davis suggests assessments would ‘not necessarily be informative’ 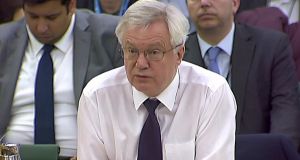 UK Brexit secretary David Davis has confirmed that his government has not conducted sector-by-sector studies on the impact of leaving the EU, telling a parliamentary committee that such assessments would “not necessarily be informative”.

Quizzed by panel chairman Hilary Benn at a hearing of the Exiting the European Union Committee, Mr Davis said the UK government has examined the ramifications for UK industries from Brexit. However he reiterated that publishing a series of sectoral impact studies would undermine the UK’s negotiating position and potentially reveal sensitive information.

Mr Benn said it “sounds very clear to me” from other earlier comments by Mr Davis that sectoral studies did exist. But asked to confirm whether the government had compiled studies on the impact of Brexit on autos, financial services or aerospace, Mr Davis said “no to all of them”.

Mr Davis said: “You don’t need to do a formal impact assessment to understand that if there is a regulatory hurdle, that it will have an impact, an effect.

“The assessment of that effect is not as straightforward as people imagine. I am not a fan of economic models as they have all been proven wrong. When you have a paradigm change as in 2008, all the models are wrong. As we are dealing with here [with a] free trade agreement or a WTO outcome, it’s a paradigm change.”

Mr Davis has previously acknowledged the existence of a series of papers setting out the expected impact of Brexit on different sectors. Last week he was accused of treating parliament with contempt after refusing to give MPs access to an unredacted 850-page document which amalgamated 58 papers on different sectors.

On Wednesday he stressed that ‘impact assessment’ is a technical term. He added: “You use the word impact assessment. I’ve been using the word sectoral analysis. They are different, right? People seem to assume an impact assessment consists of a quantitative forecast. As we have said, as the deputy governor of the Bank of England has said, as any number of people have said, these economic forecasts do not work.”

Mr Davis has already risked stoking tensions inside his Conservative party by suggesting that some forms of regulatory alignment with the EU may be possible after the UK leaves the EU. On Wednesday, he raised that prospect again:

“One of the reasons for the concern about the city is that we need to protect the tax revenue base there, because it’s very very large and those calculations will only be possible when we know what the range of options are, whether it’s alignment… mutual recognition of a different sort or whether it’s complete convergence. Those decisions will not be taken on ideological grounds… We will look at that on quantitative grounds as and when it’s necessary for a decision to be taken.”

The comments come after a tumultuous series of days in the Brexit negotiations, with the progress in talks between the UK and EU scuppered by disagreements over how to deal with the Border .