EU warns UK Brexit transition phase is ‘not a given’

EU’s chief Brexit negotiator says ‘it is important to tell the truth’ about consequences at a press conference this morning. 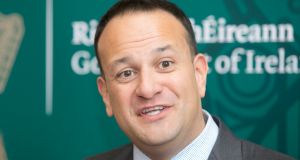 The Irish Government last night endorsed the tough line laid out yesterday in Brussels by the EU’s chief Brexit negotiator Michel Barnier, amid growing fears that the British government could resile from the commitments on the Border it made last December.

Both the Taoiseach and Tánaiste have echoed Mr Barnier’s uncompromising statement yesterday, in which he said that a transition period after Brexit for the UK – viewed as essential by London – was “not a given”. Mr Barnier also said that if the UK leaves the customs union and single market without an agreement with the bloc, then a hard Border in Ireland was inevitable.

“We welcome the clear message today from Michel Barnier that time is running out and that we need to see greater clarity from the UK regarding the future relationship between the UK and the EU, and its detailed proposals to avoid a hard Border,” Taoiseach Leo Varadkar said last night in a statement.

Both the Irish Government and the European Commission’s negotiating team are awaiting proposals from the British on how Downing Street’s pledge to avoid a hard Border while leaving the customs union and the single market can be achieved in practice.

In advance of December’s EU summit, the British government promised to avoid a hard Border, saying it would produce proposals to achieve this within the context of the overall EU-UK Brexit deal. In the absence of an agreement, London said it would produce standalone proposals to ensure an open Border. And if this could not be agreed, British prime minister Theresa May pledged to maintain the same customs rules in the North as in the EU. She also said there would be no difference in the rules in the North as in the rest of the UK.

However, although Ms May held crucial meetings with her cabinet this week to discuss Britain’s approach to the next phase of the Brexit negotiations, the EU side fears the British are no closer to setting out what they want and how they propose to achieve it.

Privately the Irish Government is increasingly worried that the British government will be unable or unwilling to translate into concrete legal proposals its pledge to avoid a hard Border on the island.

This week it emerged that the European Commission is likely to propose a legal text to give effect to the British pledges that would effectively mean that Northern Ireland would remain under the rules of the customs union and the single market.

Though Ms May has also promised the DUP – on whom it depends for a majority in the House of Commons – that there will be no difference between the rules in Northern Ireland and those in the rest of the UK, the commission regards this issue as an internal British matter. Its concern is with the Irish Border, not the rest of the UK.

In his statement, Mr Varadkar strongly endorsed Mr Barnier’s approach. “Mr Barnier has made clear that the third option – maintaining regulatory alignment – must be spelt out in the withdrawal agreement as a reliable default option to apply, unless satisfactory alternative arrangements are agreed. The Government shares this view and welcomes the clarity of today’s comments,” he said.

A spokesman for Tánaiste and Minister for Foreign Affairs Simon Coveney said: “Both the Taoiseach and the Tánaiste have repeatedly made clear this week that there can be no backsliding on the December agreement and we continue to receive unstinting support from our EU partners in this respect.”

Irish officials see the absence of any proposed solution on the Border from the British side as leaving the ball firmly in the UK’s court.

“We are looking for the Brits to come back and tell us what they want, explain to the EU how they plan to do this,” said a Government source.