Such sales lead to congregation and gathering of people, Micheál Martin says

Taoiseach Micheál Martin has warned pub owners and members of the public to “forget about takeaway pints” who said their sale encouraged social gatherings at odds with Covid-19 regulations designed to keep people at home. Video: RTE News Now 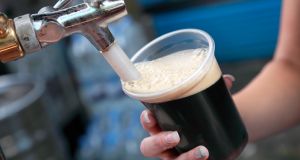 The Vintners’ Federation of Ireland (VFI)said the appeal was just that - nothing has changed with regard to the law allowing off-premises trade. Photograph: iStock

Publicans were warned to “forget about takeaway pints” by Taoiseach Micheál Martin who said their sale encouraged social gatherings at odds with sweeping Covid-19 regulations designed to keep people at home.

Mr Martin addressed the subject twice during Wednesday’s press briefing, unequivocally denouncing the sale of takeaway alcohol even though licensing laws allow it.

“This is a very serious situation we are in. It leads to congregation; it leads to gathering of people which can spread the disease and the virus and that’s a very, very clear message from me and from Government.”

When later asked about licensing laws, the Taoiseach said simply that people should not be gathering outdoors but that off-license trade would continue as normal.

“A clear message, because the message is to stay at home, I’m saying to publicans it’s not on that anyone would be selling pints.”

However, the Vintners’ Federation of Ireland (VFI), representing publicans outside Dublin, said Mr Martin’s appeal was just that - nothing has changed with regard to the law allowing off-premises trade. A spokesman said it remains a matter for individual pub owners although responsible adherence to public health guidelines continues to be urged.

Official Government Level 5 regulations are that wet pubs remain closed and that bars serving food can offer “takeaway food and delivery only”.

The VFI spokesman said the Taoiseach, by his remarks, “will have caused a lot of confusion which we will have to clear up with our members”.

Still, the issue is not significant outside the capital where less than 20 per cent of pubs had been availing of off-premises trade by late last year.

The notion of prohibiting takeaway pints is not new. Last November the Government moved to do just that following outrage at the emergence of online footage of large crowds engaging in on-street drinking. However, the Attorney General advised it would be easier to outlaw the consumption of the alcohol than its sale.

Last year the Licensed Vintners Association (LVA), representing the Dublin trade, wrote to the Government saying on-street drinking should be banned and that it would not oppose any move to end takeaway sales. In a tweet it supported the Taoiseach’s comments on Wednesday.

In the main, nothing changed for the pub trade as a result of Wednesday’s tightening regulations - the hospitality sector was closed to customers from Christmas Eve.

However, aside from the takeaway sales debate, it now looks like many pubs will complete one year of Covid-19 related closure.

At Wednesday’s briefing, Tanaiste Leo Varadkar said if he were running a business he would be considering the possibility of it remaining closed until the end of March. Pubs in Ireland first ceased trading on March 15th, according to the VFI which said it is now solely an issue of what supports are offered.

Meanwhile, Ibec, the business lobby, said the “exceptional performance” of the economy last year, as reflected in exchequer numbers, showed resources are there to support sectors bearing the heaviest burden of ongoing restrictions.

Chambers Ireland also urged the Government to expand financial supports for businesses, warning that growing debt could otherwise “trigger a wave of insolvencies and job losses”.

The continued freeze of public movement is bleak too for the taxi industry. Vinny Kearns, general secretary of the Taxi Dispatch Operator’s Representative Association said they have been “hit as hard as hotels, pubs and restaurants”.

“This is now a crisis for many of our members,” he said, adding that little had been forthcoming in terms of support.