Czech Republic: Over 126,000 positive for Covid-19 as virus surges in eastern Europe 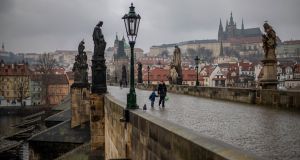 A woman with a child on an almost empty Charles Bridge in Prague, Czech Republic, as Covid-19 lockdown continues. Photograph: Martin Divisek/EPA

The Czech Republic has reported its sharpest daily rise in coronavirus infections, amid growing concern across central and eastern Europe over the availability of vaccines against Covid-19.

Czech officials said on Wednesday that 17,278 new cases had been confirmed over the previous 24 hours, and that 126,348 people were currently infected – the most active cases ever recorded in the country of 10.7 million.

The Czech Republic now has one of the world’s highest infection rates, averaging 993 new cases a day per million people over the week to Tuesday, according to ourworldindata.org. During the same period, the Republic of Ireland logged a daily average of 720 new cases per million people.

The Czech health system is under strain with more than 7,000 people now in hospital with Covid-19, making it a bleak start to the new year for a country that was widely praised for its confident handling of the pandemic last spring.

Czech prime minister Andrej Babis acknowledged that he lifted restrictions too quickly in early summer, however, and his government struggled during the final months of 2020 to control the virus while trying to keep the economy moving.

“The situation is not improving. The number of people in hospital is still growing,” said Czech health minister Jan Blatny. “Unfortunately, the number of infections in families and among the elderly is growing. This is because of socialising over Christmas.”

He also argued, however, that the infection rate in the Czech Republic was not as bad as that in other European states that did less testing.

“We are not the worst in Europe,” Mr Blatny wrote on Twitter.

“Thanks to widespread testing we are also picking up asymptomatic carriers who might otherwise unknowingly transmit the disease. Such people make up a quarter of those tested each day.”

Neighbouring Slovakia tested about two-thirds of its 5.4 million people for coronavirus two months ago, but now faces surging Covid-19 cases and hospitalisations. In response, the government has tightened restrictions, closing hotels and ski resorts and banning travel between districts.

Fears over the winter toll of coronavirus are being compounded by frustration at what some states see as the EU’s slow rollout of vaccines.

“We have called for faster action. Unfortunately, there has been a long delay,” said Mr Babis.

“It’s not normal that the AstraZeneca vaccine, which we purchased in August, has not yet been approved,” he added, referring to a vaccine that the UK began using this week but which is yet to be cleared by EU authorities.

Thirteen EU states have jointly urged the European Commission to send coronavirus vaccines to the bloc’s Balkan and eastern neighbours, while Moscow has announced plans to supply Serbia with two million doses of its Sputnik V vaccine, which was administered on Wednesday to Belgrade’s speaker of parliament and interior minister.