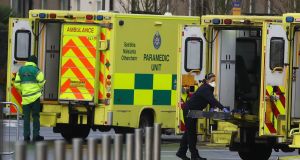 Watched by a wearied and fearful country, the Government slumped into the third national lockdown on Wednesday, warning that the third wave of the pandemic now threatens to overwhelm the health service as numbers of infections climb to previously unimaginable heights.

Barely an hour after the Taoiseach and his fellow Coalition leaders announced the new lockdown measures, public health chiefs released the latest daily number of new cases – just shy of 8,000. Unless these numbers begin to abate soon, they will crash through even the surge capacity in the health service that will surely be called into operation in the coming days.

The leaders of the Government now fear that the health service will simply be unable to deal with the number of cases seeking admission to hospital wards and to intensive care units in the coming days and weeks.

The important numbers over the coming days are not so much the case numbers, says one senior figure, it is the hospital numbers and the intensive care unit numbers. The nightmare scenario of last March is back: the wolf is at the door.

The lockdown is – for everyone with the exception of the Leaving Cert students – as stringent as last March. Few sources who spoke privately on Wednesday night expected it to finish in three weeks.

All the social problems that are exacerbated by these conditions – educational disadvantage, domestic violence, economic damage, and the rest of that grim procession – will return. Ireland is not alone for sure, but it is a hell of a price to pay for a meaningful Christmas. The truth is that the price is vastly more than anyone envisaged.

The search for someone to blame is understandable, and will continue, even if there are more pressing matters for everyone to deal with right now. Internally within the Government, there is a cacophony of finger-pointing and dissent. But ultimately the Government as a whole makes the decisions and ultimately it is accountable for them. But such judgments will be more wisely made in the fullness of time, allowing for their consequences to play out, for better or for worse.

However the blame game goes, the future of the Government’s authority – and therefore its ability to enforce its will, on Covid and other matters – rests on two issues. One is within its own control, the other is not.

Fate of the country’s hospitals

The first is the fate of the country’s hospitals over the coming fortnight. If the hospitals are overrun it will be a hammer blow to the Government’s authority and credibility. The claim the Coalition could reasonably make before Christmas – when it had the lowest infection rate and limited excess deaths – that it had managed the crisis well would no longer be tenable.

The second issue is more – though not entirely – within the Government’s control. The roll-out of the vaccine has been slow to start. Unless it accelerates, the Government will look woefully inadequate, especially as vaccinations continue at an apparently rapid pace in the UK and elsewhere.

Teething problems are understandable and there are constraints on supply. But if the Government is not vaccinating as quickly as it is receiving supplies very soon – and is able to demonstrate that it is – people will draw their own conclusions about its competence and credibility.