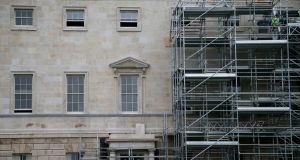 The scaffolding is coming down on Leinster House as the refurbishment comes to an end. Photograph: Nick Bradshaw

Extensive refurbishment works on Leinster House will be completed by the beginning of August at a total cost of just over €17 million, the Office of Public Works has confirmed.

Work began on renovating the 270-year old building in late 2017 following the discovery of major structural instabilities in the historic property and its roof.

The projected contract period was for 54 weeks but it was extended due to what the OPW said was “the discovery of previously hidden and unforeseeable building elements that required remediation”.

That wasn’t the only unexpected find as builders uncovered a number of historical artefacts, including children’s toys from the 19th century. These included a wooden whistle, a spinning top, a solid wooden ball and a toy soldier in a crimson uniform.

Explaining the delay in completing the project, the OPW said: “During the early stages of on-site work, it became clear to the OPW that additional works would have to be undertaken.”

This followed detailed examination and opening-up works of areas such as the roof, hidden floor zones, unstable chimneys and inadequate structural cross bonding.

The OPW has said that additional work was required on external stonework, brickwork, additional fireproofing and addressing hidden voids discovered in the structure of the building.

A spokesman for the OPW said the completion date of the project was now August 2nd.

However, it will be a number of weeks before the building will be full reopened as fit-out works are required, including the reinstatement of furnishings and art work.

The OPW and the Oireachtas are confident the House will reopen by the time the Dáil and Seanad reconvene in September. The original budget was €14.878 million but the OPW said the project will have exceeded its budget by 15 per cent, giving a total of just over €17 million. The higher-than-anticipated spend has been attributed mainly to unforeseen issues with the building.

The construction of Leinster House, the townhouse of the Duke of Leinster, James Fitzgerald, commenced in 1745. Later, it was home to the Royal Dublin Society and has been the seat of the Oireachtas since the foundation of the State in the 1920s.

The work was initiated when a survey indicated the top floors were unsafe and in need of urgent remediation. When more thorough surveys were conducted, it became evident that significant structural issues needed to be addressed.

During the works, Seanad Éireann was temporarily rehoused in the National Museum of Ireland.

Among the other items discovered during the works were a page of Faulkner’s Journal dated to 1750, a photo negative of a couple in 1920s-style dress, and a notice for a charity sermon from 1791.

The wiring in the house was found to be less than uniform with almost 30 different wiring systems, dating from various decades. The windows, shutters, joinery and stone work all needed to be repaired. All of that work was done by hand by specialist conservation craftspeople.

To facilitate the work, an elaborate scaffold was erected that covered both sides of the building and also went over the roof. A temporary corridor that linked the Dáil and the modern annex called Leinster House 2000 was also used to house a temporary exhibit on the first 100 years of the Dáil.

The contractors have begun removing the scaffold over the past week.