Fintan O’Toole on ‘an act of defiance of Irish democracy’ 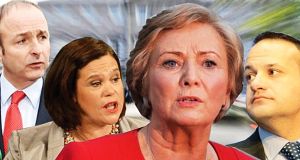 Taoiseach Leo Varadkar called the Department of Justice ‘dysfunctional’ on Tuesday, but it is worse than that, says Fintan O’Toole.

Taoiseach Leo Varadkar called the Department of Justice “dysfunctional” on Tuesday, but it is worse than that, says Fintan O’Toole.

The failure by the Department to give the infamous emails at the heart of Frances Fitzgerald’s downfall to the Charleton Tribunal is an act of defiance of Irish democracy.

It requires an independent investigation with the power to question witnesses under caution and seize documents, phones and computers, O’Toole says.

He talks to podcast regulars Hugh Linehan, Fiach Kelly and Sarah Bardon in part one of today’s podcast.

In part two they hear from London Editor Denis Staunton about the persistent belief in London that Dublin’s “bloody difficult” position on Brexit is motivated by party politics, the rise of Sinn Féin, or even a forthcoming presidential election - anything really, except for what Simon Coveney and Leo Varadkar are actually saying.