Border could be left as key unresolved Brexit issue

Cliff Taylor: Ireland and UK now under pressure to agree on the Border 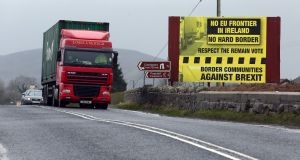 London has repeatedly said that the Border issue can only be sorted in the context of the stage two talks on trade, but Dublin fears that the UK will use the Border as a bargaining tool in those negotiations. Photograph: Paul Faith/AFP/Getty Images

Taoiseach Leo Varadkar and Minister for Foreign Affairs Simon Coveney, freed from domestic political upheavals, now face the challenge of heading into a vital summit, so far still seeking a commitment from the UK on a way forward.

Intense diplomatic contacts are under way between Dublin, London and Brussels to see if a formula can be reached ahead of the December EU summit on the future of the Irish Border.

Irish issues are one of three main areas on which sufficient progress must be made if the talks are to progress to the next stage of discussing future trading arrangements between the UK and the EU.

A formula of words must be found to satisfy the EU side – and particularly Ireland – that Britain has committed to finding a workable solution about the Border post-Brexit.

The focus on the Border issue increased dramatically late on Tuesday as it emerged that an outline deal had been done on Britain’s financial commitments to the EU . These commitments relate to what it owes in relation to EU spending programmes, pensions and other liabilities. Reports were that the Conservatives had effectively conceded to the EU on this issue .

With agreement also likely on citizens’ rights , the Border now looks set to be the key outstanding issue to be agreed. If agreement on the other areas holds, Dublin and London could come under pressure to reach a compromise to allow the talks to progress.

The Irish Government has expressed confidence that it has full EU support from the 26 other States on the issue and it now remains to be seen if it starts to come under pressure to modify its position, or to settle for a weaker commitment now and the promise of further negotiations. Ireland has a veto on progress at this stage of the talks, but will hope not to have to use it.

Contacts are under way between London and the EU task force in charge of the negotiations, with increasing political input from Dublin likely in the days ahead.

Whatever is agreed now about the Border, much will still remain to be done in the second phase of the talks.

Fears had been raised that an early Irish general election would have damaged preparations for next month’s summit and its negotiating position, leading to strong attention from other EU capitals on Irish political developments.

Ireland’s diplomatic challenge is considerable. The Government wants written commitments from London, but is also keen to see the talks progress to a new trade deal vital to Ireland’s economic interests.

The Government’s case is founded on the Good Friday Agreement, sensitivities about a return to Border controls, and the preservation of the common travel area and 142 areas of cross-Border cooperation.

Progress has been made on the common travel area and cross border cooperation, but securing the free movement of goods across the Irish Border is now the main challenge. This is difficult given London’s determination to exit the European Union’s customs union and single market.

Given London’s insistence on leaving the EU customs union, a Border will be required between the EU and UK to control the movement of goods, unless some way is found to avoid this via new trading arrangements.

London and the Democratic Unionist Party have ruled out special status for Northern Ireland, but that would mean unacceptable checks on goods between Britain and the North.

A recent leaked paper from EU negotiators referred to the goal of requiring the same trading rules and regulations applying on both sides of the Border, to avoid the need for Border controls.

This area of aligning rules and regulations is now the focus of contacts between London, Brussels and Dublin, in the search for a mutually agreeable wording. However a formula will be difficult to find.

London has repeatedly said that the Border issue can only be sorted in the context of the stage two talks on trade, but Dublin fears that the UK will use the Border as a bargaining tool in those negotiations.

Ireland’s preferred position is for Britain to remain in the single market and customs union, but this has been repeatedly ruled out by London. Ireland hopes this will come back into play as Brexit’s economic costs become clearer.

For now the Conservative government continues to insist that it will leave the EU trading bloc, control immigration and leave the jurisdiction of the EU courts.

All sides agree that the task ahead of the summit is to find some form of wording agreeable to both sides. Some kind of commitment in the area of regulations not diverging across the Border could satisfy the EU – and Irish – side.

However, London will have difficulty signing up, not least because the DUP refuses to see the North treated differently to the rest of the UK.

With the fresh breakthrough on Britain’s financial commitments to the EU, the focus is now firmly on the the Border issue.