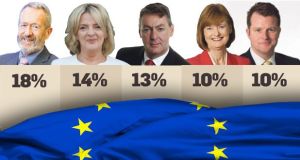 At this early stage of the campaign undecided voters in South stand at 30%.

With two weeks to go before votes are cast in the 2019 European Elections, early indications are Fine Gael will top the poll in each of the three constituencies, according to today’s Irish Times/Ipsos MRBI Euro Constituency polls.

For Fianna Fáil the signs are positive in Dublin and South, and an improvement on their 2014 performance when just one Fianna Fáil candidate was elected seems likely.

Sinn Féin secured three seats in 2014 and all three Sinn Féin MEPs are up for re-election. Today’s polls suggest all three MEPs could be returned, with each candidate polling competitively in their respective constituencies.

A re-run of 2014 when three Independent MEPs were elected is possible, although only one Independent candidate looks in any way safe at this point in the campaign.

Interviewing for today’s polls took place between Monday and Wednesday of this week among 500 voters in each of the three European Election constituencies (Dublin, Midlands North West and South). Interviews were conducted face to face, in voters’ own homes.

Polls this early in any campaign, and especially in European Election campaigns, have limited predictive ability due to the high number of undecided voters, which ranges in today’s poll from 20 per cent in Midlands North West to 30 per cent in South.

The arithmetic will change in the weeks ahead as familiarity with the candidates grows and media coverage of the campaigns gets into full swing.

A notable change since the last European Parliament elections in 2014 is the election this time of one reserve candidate (to come in to play once the UK exits the EU) in both the Dublin and South constituencies, bringing their seat allocations to four and five respectively. Not that these extra seats will make it any easier to get elected, as the number of candidates running in each constituency has climbed since 2014.

Honours for the most crowded ballot go to the South constituency (with 23 names), followed by Dublin (with 19 names) and Midlands North West (with 17 names). Of course, a crowded ballot means a long tail of candidates, which has the potential to dilute the alternative vote and make it more difficult for Independent and smaller party candidates to get elected.

In the Dublin constituency, three candidates will be elected to the European Parliament, with a fourth candidate held in reserve for when the UK leaves the EU. Sinn Féin’s Lynn Boylan is the only sitting MEP looking to retain her seat, so at least two (or three in the event of Brexit) new Dublin MEPs will be going to Europe.

Today’s Dublin constituency poll gives former Fine Gael minister Frances Fitzgerald front runner status with 22 per cent of the vote and the possibility, if not the strong likelihood, that she will be elected on the first count.

Fianna Fáil, through Barry Andrews (on 18 per cent), should win back the Dublin seat they lost in 2009.

After Fitzgerald and Andrews, Sinn Féin MEP Boylan (on 13 per cent) leads the chasing pack, with perhaps enough of a lead – three points – to be confident of retaining her seat.

Close on the heels of the Sinn Féin MEP are Independent TD Clare Daly (on 10 per cent), the Greens’ Ciarán Cuffe (on 9 per cent) and former Labour minister Alex White (on 8 per cent), in what could be regarded as a statistical dead heat. Any one of these candidates could take a seat in Dublin.

Former deputy first minister of Northern Ireland and MEP candidate for Fine Gael in Dublin, Mark Durkan, registers 7 per cent support and is still very much in the running.

Four candidates will go forward from the Midlands North West constituency and while constituency polls at this stage in the campaign are not predictive, the very strong showing of Fine Gael MEP Mairead McGuinness (on 26 per cent) means she is almost certain to keep her seat.

Where the third and fourth seats go in Midlands North West is difficult to say. Current Sinn Féin MEP Matt Carthy (on 14 per cent) is polling lower than his election result in 2014 but is still likely to hold on to his seat. Also, Maria Walsh (on 11 per cent) could secure a second seat for Fine Gael, with a little help perhaps from McGuinness if she achieves well over the quota.

Peter Casey (on 9 per cent) is very much in the hunt at this stage and his ability to capture the voter’s attention in the heat of an election could be enough to get him across the line this time.

Fianna Fáil are also in the mix in Midlands North West, with a combined vote of 13 per cent – Brendan Smith (on 8 percent) and Anne Rabbitte (on 5 per cent).

The South constituency is currently a four-seater but is set to expand to five seats after Brexit.

Current Sinn Féin MEP and recent presidential candidate Liadh Ní Riada (on 14 per cent) and Fianna Fáil TD Billy Kelleher (on 13 per cent) are next in line for seats in South if their support holds up over the course of the campaign.

A second seat for Fine Gael in South is also a real possibility – Fine Gael have a further 19 per cent of the vote tied up in MEP Deirdre Clune (on 10 per cent) and Andrew Doyle (9 per cent).

And let’s not forget the colourful Wexford Independents 4 Change TD Mick Wallace (on 8 per cent) who is only a stone’s throw from being in contention.

Today’s Irish Times/Ipsos MRBI Euro constituency polls are informative, not conclusive. The findings, with two weeks of campaigning to go, only tell us where the candidates are starting from. With so many voters still undecided, anything can happen, and will happen, between now and polling day.