A new ad campaign from the Government called "No Excuses" aims to highlight sexual harassment and sexual violence in Irish society. Video: Department of Justice & Equality 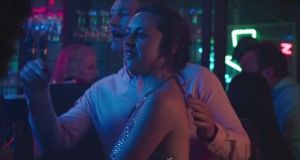 Minister for Justice Charlie Flanagan has said Ireland suffers from “disturbingly high levels” of sexual harassment and violence and there is behaviour on a daily basis which is “unacceptable”.

Mr Flanagan said he is concerned there is an underreporting of sex crimes for “a number of reasons”.

A major national awareness campaign on sexual harassment and sexual violence was launched by the Department of Justice on Thursday.

‘No Excuses’ is a media campaign, costing about €1million, which will feature across TV, cinema, radio, social and digital advertising.

Mr Flanagan said the campaign will highlight and help people recognise sexual harassment and violence, and the precursors to them.

“I want to spark a conversation across Irish society, not only among some sectors but among everybody. We have on a daily basis, on a nightly basis, behaviour which is unacceptable,” he said.

The campaign will run for three years until 2021 with TV advertisements broadcasting from Friday. The TV advertisements feature male and female perpetrators and victims and cover a number of scenarios ranging from sexual harassment in the workplace, unwanted physical attention at a bar and an attempt to coerce a partner into unwanted sexual activity.

The campaign is being run by Csoc - the National Office for the Prevention of Domestic, Sexual and Gender-based violence, which is part of the Department of Justice.

“We do have a robust body of power, often times there’s an issue on the matter of enforcement. There is the issue of reporting but I believe what we’re doing this morning is ensuring a greater level of awareness in order to facilitate reporting and ultimately the process of complaints in accordance with law,” he added.

Mr Flanagan said it is important there are role models in the area of sport, culture, music and politics in relation to reporting sex crimes. He said within the sporting arena in particular, it is important to have people who are “willing to talk now about unacceptable behaviour that often times we dismissed under the label of ‘ladism’.”

Almost one third of Irish women between the ages of 18 and 34 said they had experienced some form of sexual harassment in the last 12 months, the highest level in Europe and the second highest of all 40 countries surveyed, with Mexico ranked first.

Tanya Sweeney: You get a lot of brain space back when you stop hating your body