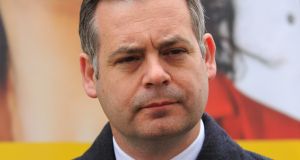 Officials from the Government department charged with delivering the national broadband plan were accused in the Dáil of “cooking the books”.

Sinn Féin deputy leader Pearse Doherty said senior officials in the Department of Public Expenditure made the accusation over the figures produced by the Department of Communications in its cost benefit analysis of the project.

He said they noted “this project may never be delivered because the department doesn’t have capacity to oversee. The cost benefit analysis is not credible.

“They’re saying that they were cooking the books, that the bidder doesn’t have the capacity and that there’s no incentive for the bidder to deliver after a number of years if further losses are incurred.”

In the ongoing row over the Government decision to announce a preferred bidder to deliver high speed broadband to 540,000 households, farms and other businesses, he also highlighted questions about the capacity of the preferred bidder Granahan McCourt, the sole remaining contractor in the process to deliver the project and concerns it could abandon the project.

“There is so little skin in the game from the investor,” Mr Doherty said.

“He will have recouped all of his investments before the project has been delivered.”

Senior officials questioned the bidder’s capacity to deliver the project and questions were raised about the bidder abandoning the project, which had not been addressed. And he said questions about alternative options had also not been properly addressed.

But Tánaiste Simon Coveney said all the options had been looked at. Alternative have been assessed through the process but also before it. He added that the bidding process had taken three years.

The argument had been made that technology may change and it could be done through mobile phones and wireless.

But he said “the private sector is investing in fibre today because that is what is being demanded”.

He said there would be 147,000 km of fibre on existing poles and he pointed to the bidding process taking three years.

Mr Coveney stressed that there had been appropriate due diligence to actually test the capacity of the remaining bidder.

Mr Dooley said the Government announcement was aimed at boosting Fine Gael in the local and European elections on May 24th.

The Clare TD said the Government claims were “bizarre” since no contract had been signed with the bidder, Granahan McCourt.

The Government said the contract would be signed in six months’ time - but there was considerable doubt about that.

“In fact there are real concerns that this contract will never be signed,” Mr Dooley said.

He added that the announcement was effectively an admission that the deadline of 2020 for delivery had now been delayed to 2027. Could it really mean 2030 or even 2040, he asked.

Mr Dooley also said the contractors would make back their investment inside eight years and own the network after 25 years, holding a monopoly of supply to people in the country.

Mr Coveney said that if the Government had not made its announcement this week, they would have been accused of “delay and indecision”.

This was the biggest ever Government investment in rural Ireland. The Cabinet had publicised everything right now and would continue this policy of openness.

He could not say what the bidder’s investment in the project in which the State is investing €3 billion would be.

That would emerge in due course, he said.