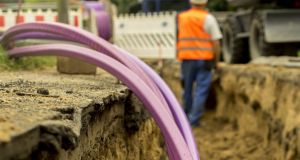 A storm of criticism greeted the Government’s National Broadband Plan on Wednesday as official documents revealed the extent of objections to the project by senior civil servants. File photograph: Getty

The cost of the National Broadband Plan, including private investment, is now expected to exceed € 5 billion, it has emerged.

And despite paying the bulk of the cost, €3 billion, the Government will not own the network once built. Typically in public-private partnerships, the asset reverts to the State after the contract expires.

“When taking the overall cost of this into account before revenues the estimated total project cost is estimated to be circa €5 billion, exclusive of VAT, over the first 25 years,” a Department of Communications spokesman confirmed to The Irish Times on Wednesday.

The €5 billion figure implies the preferred bidder – a consortium led by US businessman David McCourt – is investing €2 billion in the project.

A storm of Opposition protest and criticism greeted the Government’s National Broadband Plan on Wednesday as official documents revealed the extent of objections to the project by senior civil servants.

Opposition leaders demanded that the Dáil be adjourned to allow time to examine the documents released and returned later to voice fierce criticism of the plan and the Government’s handling of it. Privately, some Ministers expressed astonishment at the vehemence of official objections to the proposal.

Fianna Fáil leader Micheál Martin and Sinn Féin leader Mary Lou McDonald demanded to know how much the preferred bidder is investing in the project. They noted the fact that Mr McCourt’s consortium would own the network at the completion of the 25-year contract. But Minister for Communications Richard Bruton refused to release the figure, saying it was commercially sensitive.

The released documents reveal a furious behind-the-scenes battle between officials in the Departments of Public Expenditure and Communications.

Will public projects be cancelled?

Department of Public Expenditure officials also suggested the State was investing most of the money and assuming most of the risk, while a private company would garner many of the benefits.

The department also advised that other capital projects – and it listed a series of specific schemes including roads, schools and social housing – would have to be postponed or cancelled to find the money for the broadband project.

But Mr Donohoe later said no projects would be cancelled and the Government would find more money for the broadband plan.

He said he believed “on balance this is the right thing for us to do”.

Speaking last night in the Netherlands, Taoiseach Leo Varadkar said the plan was “a leap of faith in believing in the future of rural Ireland”. He also said he had confidence in Robert Watt, the secretary general of the Department of Public Expenditure, who advised against proceeding with the plan.