If broadband plan falters rural Ireland will never get it, Naughten says 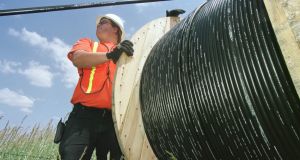 The installation of broadband in rural Ireland has proved to be a political hot potato. File photo: Michael Smith/Getty

Former minister for communications Denis Naughten warned if the proposed National Broadband Plan falters between now and the signing of the contract he does not believe that there will ever be high speed broadband in rural Ireland.

“If this falters I don’t honestly believe that we will ever get high speed broadband into rural Ireland. I believe for generations to come we’ll be talking about haphazard services - it will be a band aid situation, for a few years it will be good and then it will drop off, it will become a big political issue again.”

Speaking on Newstalk’s Pat Kenny show he acknowledged that the announcement of details for the National Broadband Plan this week was unfortunate timing.

“This was ready to go last October, this is not about Netflix for people in rural Ireland that perception is being put out there.”

Mr Naughten also said that when Eir (then Telecom Eireann) was privatised the key infrastructure such as telegraph poles and ducting, should not have been sold.

Mr Naughten defended the proposed plan saying that it is going to transform rural Ireland in terms of the health service. “If because of broadband going into a rural home we can put in monitors and technology for an older person - at some stage over the next 35 years, if we can keep an older person in their home for an extra six weeks rather than going into a nursing home, we’ve paid for that service.

Meanwhile Minster for Communications Richard Bruton said the Government concession to Eir that allowed it remove 300,000 homes from the National Broadband Plan in 2017 has added to the overall cost of the scheme, has accepted.

However, Mr Bruton has said the Government had no choice but to agree to the removal as under EU State aid rules Eir was entitled to connect the homes on a commercial basis without State intervention.

“There was no way a Minister could avoid letting that happen,” he said of the decision taken by his Mr Naughten.

The Minister said that the decision had a knock-on effect that added to the cost of the plan. “It does add to the cost relative to the revenues,” he said.

He said that the plan would now have to bypass homes that were formerly in the plan and would not be able to get revenue from them.

Asked could the Government have achieved lower costs, he said it had looked at every conceivable alternative and carried out exhaustive due diligence.

“At the end of the process we determined that fibre was the best and most cost effective way of delivering best coverage.”

The Cabinet decided on Tuesday to award preferred bidder status for the National Broadband Plan to the sole remaining bidder in the competition, the national Broadband Ireland consortium led by the US businessman David McCourt. The decision was made despite furious opposition by Government officials who feared the project did not represent value for money.

On Thursday, The Irish Times reported that he cost of the plan, including private investment, is now expected to exceed € 5 billion. And despite paying the bulk of the cost the Government will not own the network once built.Mr Bruton gave some new details on costs, saying the State would pay less than half the overall cost, with the commercial investor Granahan McCourt, and subscribers, paying over half.

When asked was the figure of €5 billion plus Vat accurate, Mr Bruton said that that was the cost over a 25 year period.

Meanwhile leading economist Prof John Fitzgerald has said the Government should “go back and look at the broadband plan again” amid a storm of protest at the decision to go ahead with the €5 billion project.

Speaking last night in the Netherlands, Taoiseach Leo Varadkar said the plan was “a leap of faith in believing in the future of rural Ireland”. He also said he had confidence in Robert Watt, the secretary general of the Department of Public Expenditure, who advised against proceeding with the plan.

The plan was first announced in 2012 by then communications minister Pat Rabbitte. Since then it has been mired by delays and setbacks.

The cost of the project was originally estimated at between €355 million and €512 million, but last month the Taoiseach Leo Varadkar confirmed the cost would end up being closer to €3 billion.

Prof Fitzgerald said the original contract was too complex in its nature which was why other bidders had withdrawn from the process adding that the Government feels the need to deliver for rural Ireland so they had made a political decision, he said.

“Yes they know that this is bad value, but they feel politically they need to do it”, he added.

He said that it was up to civil servants to provide advice and it is up to the political system to say they have other considerations. This was a common occurrence but what was unusual in this case was the size of the project.

Prof Fitzgerald also warned that as technology is changing other cheaper alternatives could become available. It was a mistake to commit to providing fibre for every home in rural Ireland, he said.

“It may be over engineering. Instead they should be asking ‘what kind of broadband width do you need?’

“How would you meet that need? That could be met in another way.”

The chairman of the Public Accounts Committee, Fianna Fáil TD Sean Fleming called on the consortium, led by Granahan McCourt, to be registered in Ireland and tax resident in Ireland.

“Granahan McCourt could sell on the contract. It is important that every onward sale company is resident in Ireland for tax and all other purposes,” he told RTE radio’s Today with Sean O’Rourke show.

It would be too easy for any company to be outside the country, he added.

With regard to the issue of ownership of the broadband service he asked: “do we really need to own a 35 year old cable? That could be a liability.”

He suggested that further investigations into the various possibilities for the speedy provision of broadband services for rural Ireland could be carried out in the next six months before a contract is signed with Granahan McCourt.

Being a preferred bidder did not mean that they would actually proceed with the project, he said.

“Eir owns 1.3million poles, there is a lot of work to be done before any contract is signed. There is time to do an alternative method.”