Irish citizens ‘will still be able to work, study and, above all, will be welcome’, says British minister 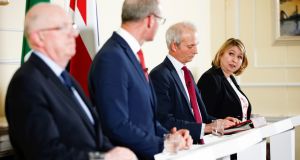 The British and Irish governments have signed an agreement that formally outlines the provisions of the Common Travel Area (CTA) for the first time and guarantees the reciprocal rights it confers regardless of Brexit.

“Our message to Irish citizens in the UK is that your rights will not change. You will still be able to move freely between Ireland, the UK and the islands.

“You will still be able to work, study, draw your pension and access social security and public services in the UK. Above all, you will be welcome. And we welcome the similar commitment the Government of Ireland makes to British citizens in Ireland,” Mr Lidington said.

Mr Coveney said the agreement should reassure British citizens in Ireland and Irish citizens in Britain that, regardless of whether Britain leaves with or without a deal, their rights and privileges would be protected.

“This Memorandum of Understanding is comprehensive but it’s also flexible enough to be able to be updated and changed in the future if necessary and will be backed up with legislation in the necessary areas,” he said.

Mr Lidington and Mr Coveney were joined by Minister for Justice Charlie Flanagan and Northern Ireland secretary Karen Bradley for the two-hour BIIGC meeting. Established under the 1998 Belfast Agreement, the BIIGC did not meet from 2007 until last July but met again last November.

Wednesday’s meeting focused on the future of the east-west relationship, economic cooperation, security issues in Northern Ireland and legacy issues as well as the Stormont talks.

“The theme running through this is how we can strengthen our bilateral cooperation on everything from economic regeneration to security and justice. We obviously very much welcomed the resumption this week of talks aimed at restoring the Executive at Stormont,” Mr Lidington said.

The memorandum of understanding sets out an agreed policy framework for the CTA, which not only guarantees free movement of people between Britain and Ireland but covers access to social security, health and education. The two governments have agreed to maintain existing arrangements on social insurance, child benefit and pensions. They have also agreed to work on new arrangements to ensure that British and Irish citizens will continue to have equal access to public health and education services in both countries.

Newcastle University’s Colin Murray, a legal academic in the research project NI Constitution who campaigned for the CTA to be codified, said the agreement had been largely settled for months.

“It is being concluded now because there is a period of relatively low tension in the Brexit negotiations, because the Irish and UK governments being seen to work together supports the drive towards a deal on restoring power-sharing institutions within Northern Ireland, and because, from the Irish Government’s perspective, Theresa May might not be long in office, and the CTA therefore needs to be locked down,” he told The Irish Times.

“The CTA helps support the €70 billion annual trade between our countries. It has resulted in there being more Irish Directors of UK companies than any other foreign nationality and it has contributed to Irish companies being the fifth largest foreign owners of UK firms,” he said.

“Today’s agreement will go some way to protecting these achievements. However, the British Irish Chamber of Commerce remains clear in its view that the best way of protecting the economic and social links between these islands is through an orderly withdrawal of the UK from the EU followed by an unprecedented close future relationship. We encourage public representatives on all sides to work together to make this happen.”