FG were ‘testing the water’ with Verona Murphy, says Howlin 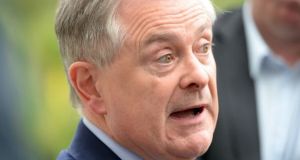 Mr Howlin said he was “deeply concerned” about remarks made by Ms Murphy in the recent by-election campaign and warned we will see more of them in next year’s campaign.

Ms Murphy ran a controversial by-election campaign which saw her come in for sustained criticism for a series of comments about migrants.

She failed to win a seat and was dropped from the general election ticket by Fine Gael in December.

Mr Howlin said Ms Murphy should have been deselected by Fine Gael before having a chance to run.

“I think that Fine Gael should have acted much more decisively and much earlier, in terms of saying this is not acceptable and this is not our candidate, because we’re not going to align our party with those values, but they didn’t.

“And I think many of us believe that Fine Gael were testing the waters to see how far they could get away with that sort of two-stranded approach to disowning her after the event when it didn’t work — which is a different kettle of fish than to disowning her in the middle of the election by simply saying: ‘Those values, those views have no room and no space in our politics.’”

Mr Howlin suggested we will see more general election candidates making similar remarks about migrants in the next election campaign.

“I think there will be more of it. I think we will see more of it being presented in the next general election. I think there’s a leadership responsibility on all of us to say that that’s not acceptable,” he said.

“We have, by and large in Ireland, kept that toxic racist scapegoating of minorities out of our political discourse — by and large, there are some obvious exceptions to that. But, if that is to be embraced by any mainstream party, I think it will have a very negative effect and a very divisive and damaging effect on politics.”

Mr Howlin predicted Labour will double its current number of seats from seven to 14 and said they will go into government with any party that adheres to its five red lines.

They include: the establishment of a living wage; a housing policy to build 80,000 affordable homes over five years; Sláintecare; and addressing the gender pay gap.

Mr Howlin said Fine Gael will be punished in the next election for failing to empathise with the concerns of voters.

“Fine Gael will be judged very harshly over social failures. I don’t think that they empathise with the homeless, with the plight of people who can’t afford the rent. I don’t think they understand the impact of not being able to plan what you can afford to spend as a family,” he said.–PA