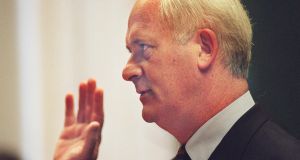 Former taoiseach John Bruton: ‘Ireland’s economic relations with Israel are very narrowly based and are likely to remain so for the foreseeable future.’ File photograph: Bryan O’Brien

Former taoiseach John Bruton opposed a residential Israeli embassy being established in Dublin when he was a government minister in the mid-1980s because it might jeopardise trade with Arab countries, and might be used for spying.

Confidential government papers from the 1980s which are being released to the public this week show that Mr Bruton, then minister for trade, clashed with then tánaiste and minister for foreign affairs Peter Barry on the issue.

Israel had been lobbying since 1976 to have a residential embassy in the capital. In 1984, the Department of Foreign Affairs brought a memo to cabinet proposing the establishment of an embassy.

However, the former Fine Gael leader was recorded as being opposed to the proposal for a number of reasons.

He pointed out that the volume of trade was not large, with imports the previous year (1983) totalling £16 million and exports from Ireland totalling £12 million. This compared with trade worth £300 million with Arab countries such as Libya, Iraq, Syria and Saudi Arabia.

A memo from Mr Bruton’s department argued that acceding to the Israeli request would “severely jeopardise an enormous amount of existing and future trade” with Arab countries.

“Ireland’s economic relations with Israel are very narrowly based and are likely to remain so for the foreseeable future.

“Israel offers little prospect of any significant growth in Irish exports and we are not dependent on Israel for any essential commodities.”

He also pointed to Ireland’s “mediation role” in the Middle East, and the safety of Irish Army and civilian personnel stationed in Arab countries.

“Finally, the Minister considers that it is probable that an Israeli Embassy here would spy on multinational and other companies trading with Arab States who sign the special declaration in relation to Israel required by the Arab Boycott Office.”

The Central Boycott Office was a pan-Arab project to deny foreign trade and investment in Israel.

Mr Barry disagreed with the assessment but said it was not a big enough step to alter the view of Arab states towards Ireland.

“The Minister for Foreign Affairs does not accept that the risks to trade are as great as those described by [Mr Bruton],” the foreign affairs memo stated.

In the event, that Fine Gael and Labour coalition was ready to approve the embassy by 1986, but did not go ahead with it after a number of Irish soldiers serving with UNIFIl were killed in South Lebanon in late 1986 and early 1987.

The matter returned to cabinet in 1989 under a Fianna Fáil government led by Charles Haughey. Minister for foreign affairs Brian Lenihan also brought a memo to cabinet that year setting out the pros and cons of establishing an embassy.

The negatives included the fact there would be no Irish Embassy in Israel; an absence of strong economic relations; the heavy burden that would be placed on Irish security services to protect the staff of the embassy; as well as exposing Ireland to adverse views from Arab countries and also to the “sharper aspects of the Middle East conflict”.

However, the document went on to say that many of those arguments had become “increasingly difficult to sustain with any credibility in the face of continuing pressure from Israel itself, from US sources and from the Jewish community in Ireland”.

It said that other countries such as Turkey, Norway and South Korea had embassies in Dublin with no reciprocal Irish embassies in those states.

It added that economic relations with Israel had grown and while special security provisions would be required, “it cannot be considered an insurmountable problem”.

The memo suggested that to allay pressure from Arab states, the government should also accede to a request to accept the diplomatic credentials of an official Palestinian Liberation Organisation representative in Ireland.

“It could be argued that embassy would give us a better channel for making the strength of our views known to Israeli authorities,” it said.

It added that the Irish would not establish an embassy in Tel Aviv. The Irish Embassy in Athens would continue to have responsibility for Israel.

An Israeli embassy was established in Ballsbridge, Dublin 4, in 1994, with an Irish Embassy being set up in Tel Aviv in 1996.