Thatcher ‘switches off’ when Northern Ireland comes up - Irish diplomat, 1989

State papers: Document reveals officials were also worried about British prime minister’s tendency to ‘go over the top’ on other issues 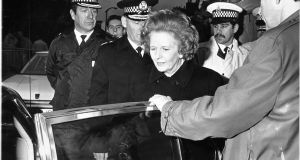 Margaret Thatcher “switches off” when Northern Ireland comes up during discussions with her officials in Downing Street, an Irish diplomat reported back to Dublin 30 years ago.

Among documents marked confidential, just released into the National Archives, David Donoghue, then posted to the Irish embassy in London, sent a note to the government about a lunch he had with Richard Norton-Taylor, a journalist with the Guardian, in October 1989.

Norton-Taylor, he wrote, had good connections in Whitehall – British government departments and ministries – and also in the British intelligence community.

“A senior Whitehall source remarked to Norton-Taylor recently, in the course of a wider conversation, that officials involved with Irish affairs are finding it increasingly difficult to engage the Prime Minister’s attention,” Donoghue reported.

“Memoranda have been sent in on a number of matters, including the current collusion controversy, but they have been received with marked disinterest.

“They find that ‘she either switches off’ or else reacts in a petulant and dismissive way.”

Donoghue reported that Thatcher’s disinterest “does not deter” the officials, however, “from trying to impress on her that the ‘general problem’ of Northern Ireland will not go away and that she has no option but to address it”.

“Senior officials are also worried by the Prime Minister’s impetuosity and tendency to ‘go over the top’ on other issues,” the report added.