There was only one story of 2019 in Irish politics. And it wasn’t ‘Swing-gate’

Year in Review: It often felt like the true epicentre of Irish politics was Westminster 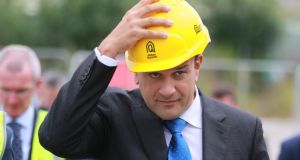 Though Leo Varadkar played Brexit cannily, he spent much of 2019 under domestic pressure. Photograph: Nick Bradshaw

Twelve months ago, a weakened Theresa May finally concluded a withdrawal agreement with the EU after months of painstaking and painful negotiations. But the House of Commons threw it back at her with a record defeat. She began the new year determined to try again, but – despite concessions, extensions and missed deadlines – May couldn’t deliver the majority.

On May 24th, having failed for the third time to get the withdrawal agreement passed, she announced her resignation. After a lengthy leadership battle Boris Johnson was elected Conservative leader, and became prime minister.

In Dublin, Taoiseach Leo Varadkar played it cool, waiting days for a phone call and weeks for a meeting with the new occupant of Number 10. When the two men did meet, they seemed to rather hit it off. Varadkar told Johnson on the steps of Government Buildings that Ireland would be Athena to his Hercules. “Ring me!” gestured Johnson as he departed.

They met again in New York and then, with the clock ticking towards a no-deal Brexit, Varadkar dashed to the Wirral near Liverpool for a supposedly private meeting. They emerged hours later with the makings of a deal: changes to the withdrawal agreement that Ireland could live with and that Johnson could pass.

Johnson accepted some checks on goods between Northern Ireland and the rest of the UK; Varadkar gave up the backstop. It was now, the headlines shouted, a “frontstop”.

It was the deal that unlocked agreement, and unlocked Brexit. Johnson promising to “get Brexit done”, romping home in the subsequent election.

But if Varadkar played Brexit cannily, he spent much of the year under domestic pressure.

Early in the year, the Government was hammered on the spiralling costs of the Children’s Hospital project, about which it seemed frequently unsure. At the same time the cost of the national broadband plan, an ambitious design to bring high-speed broadband to every home and premises in Ireland (whether they wanted it or not) was also rocketing towards €3 billion.

With overspending across a range of Government departments – health led the way as usual – and the sharp criticism of the Fiscal Advisory Council for its budgetary plans, Fine Gael’s reputation for prudent and responsible management of the public finances, always more vaunted within the party than without, took a battering.

The trouble with Fine Gael, social welfare minister Regina Doherty told an RTÉ interview, is that we have been too prudent and too responsible. This was not a proposition for which there was an abundance of evidence in 2019.

Appreciating the reality of this, the Minister for Finance Paschal Donohoe cleverly used the threat of a no-deal budget to dampen expectations of a giveaway pre-election budget. It went some way towards rehabilitating Fine Gael’s economic management credentials, even if that remains very much a work in progress.

By and large, the various strands of the opposition observed the traditional practice of demanding responsible budgeting while endorsing the spending demands of every lobby group that knocked on their door.

It was a mixed year for the opposition. Fianna Fáil continued its careful, below the radar preparation for not just the next election, but the race to form the government that will follow it. Take all the polls together and the two big parties are more or less neck and neck; the outcome of next year’s election will depend on the campaign and the context.

Micheál Martin’s late-year difficulties with his TDs’ curious voting habits demonstrated once again that his biggest problems are often found in his own party. Yet he finishes the year in a better position to put together a coalition than does his chief rival.

It was a difficult year for the Sinn Féin leader Mary Lou McDonald, who presided over a massacre of half its local authority seats at the local and European elections in May. The party took refuge in incessant campaigning for a united Ireland as the answer to Brexit, but this seemed more designed to comfort its supporters than convince unionists.

The party took solace in a spectacular byelection win in Dublin Mid-West and in John Finucane’s unseating of Nigel Dodds (facilitated by the SDLP standing aside) in North Belfast in the UK general election.

But the decline in the party’s vote across Northern Ireland showed that it is not just in the Republic where Sinn Féin declined this year. The once-irresistible rise of Sinn Féin has not just been arrested; it has gone into reverse. The next election could decide the future of Mary Lou McDonald’s leadership.

For the Green Party, new possibilities opened up this year. The party capitalised on public concern about climate change to record its best ever local and European results and has the opportunity next year for a significant breakthrough if it can maintain momentum.

Leader Eamon Ryan has his sights set on government, though many within his party are nervous about the compromises required to wield power – and about doing a coalition deal with either Fianna Fáil or Fine Gael. Ryan knows it will have to be one or the other.

The Labour Party, still scarred from its last experience of government, made some progress towards reviving itself this year, with decent local election results (they outpolled the Greens) and good showings in the Wexford and Fingal byelections. But the party’s chances of a meaningful comeback remain concentrated in a handful of constituencies. Even if it succeeds, the question of government will be a difficult one for the party.

The year saw a sharp focus on the conduct of individual TDs. Maria Bailey’s personal injuries case against a Dublin hotel became a cause célèbre which spiralled out of control for her after a disastrous radio interview. The controversy ultimately resulted in her being removed from the party’s general election ticket.

Fianna Fáil TDs Timmy Dooley, Niall Collins, Lisa Chambers and Barry Cowen apologised after voting irregularities, while the Galway Independent Noel Grealish was widely criticised after comments about asylum seekers at a public meeting, and further accusations about immigrants’ remittances to their home countries in the Dail.

The Fine Gael candidate in the Wexford byelection Verona Murphy also apologised after comments about asylum seekers, and her continued position on the general election ticket remains an open question as the year ends. The year demonstrated that the immigration and asylum issue is edging its way into Irish politics – but also that there is little tolerance in any party or the media for anti-immigrant rhetoric.

Dara Murphy opened a sore for Fine Gael that will fester through to the general election. If this year is anything to go by, that campaign is likely to feature aggressive media scrutiny of candidates.

Meanwhile, the preparations for the inevitable election continue. Like in the movie Casablanca (sure to be on television over Christmas), they wait, and wait, and wait...