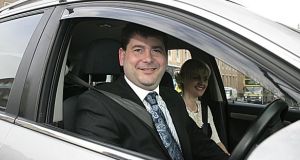 Despite not speaking in the Dáil for more than two years Dara Murphy still drew his salary of €95,000 and full allowances of €51,500. File photograph: The Irish Times

Former Fine Gael TD Dara Murphy has refused repeatedly approaches by senior figures in the Taoiseach’s office to participate in an inquiry concerning his attendance and work record as a TD between late 2017 and his resignation earlier this month.

Taoiseach Leo Varadkar, who confirmed Mr Murphy’s attitude, sharply criticised him for reneging on a commitment to take part in an inquiry into his Dáil attendance over the past two years.

Under current legislation, the former Cork North-Central TD cannot be made subject to an ethics investigation as he is no longer a Dáil member. But Mr Varadkar suggested Mr Murphy had reneged on a commitment to participate voluntarily.

“He’s somebody who, when he resigned from the Dáil, said that he would agree to co-operate with a statutory inquiry. It seems the only way that we can have a statutory inquiry is if he refers himself to the ethics committee, or the Ethics in Public Office Act,” said Mr Varadkar.

Mr Murphy began working in Brussels full time in September 2017. And despite not speaking in the Dáil for more than two years he still drew his salary of €95,000 and full allowances of €51,500. He did so by fobbing in electronically to the Leinster House system for the required 120 days each year. The majority of these recorded attendances were on non-sitting days – he was the lowest attender of all 158 TDs over two years, by a considerable margin. He had been described by colleagues as an “absentee TD”.

The Taoiseach said when Mr Murphy took the job with the European People’s Party, it was on the basis that he would continue to discharge his functions as a constituency TD and parliamentarian. He said there were several TDs who maintained second professions, but the “bare minimum” that was expected is that a Deputy represented constituents and also participated in parliament.

“You know, if Dara hasn’t done that then I think he has let us all down – those of us in Fine Gael, his constituents and the general public,” he said.

What is Dara Murphy’s response?

He said Mr Murphy had argued (in private) that he had maintained his role as a TD. He argued he had been present for more votes than the Taoiseach and as many as Fianna Fáil leader Micheál Martin and kept his constituency in Cork city open.

“He will say he has evidence to show that he was present for more than only 120 days a year. But if that’s the case, that’s why there should be a proper inquiry. In order for there to be a statutory inquiry, the only way we can do that at the moment is for him to refer himself to the ethics committee,” said Mr Varadkar.

“And despite a number of conversations in the last couple of days, as of now, he is unwilling to do that. And that to me is wrong. He should change his mind.”

The Taoiseach said the Government wanted to amend the ethics Act to make it applicable to former members of the Dáil and Seanad, as well as current ones. He said Minister for Public Expenditure and Reform Paschal Donohoe is to review the expenses regime.

He said the travel and accommodation allowance required a member of the Dáil or Seanad to fob in electronically on only a certain number of days each year to prove they had travelled to Dublin.

“That one, I think, is lax and wide open to abuse. And that’s the one that we need to review,” said Mr Varadkar.