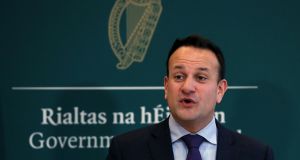 The chances of the Government surviving until after Easter have risen after Taoiseach Leo Varadkar indicated he may accept an offer from Fianna Fáil leader Micheál Martin for a short programme of government in 2020.

The Taoiseach responded by email just before 6pm on Monday evening to a letter sent to him by Mr Martin earlier this month suggesting a short legislative programme between January and April next.

It is understood the Taoiseach said Fine Gael was not in favour of the coalition winding down early.

Both leaders have now agreed to meet face-to-face in early January to see if agreement can be reached for a programme that would take the Government up to the Easter break.

If agreement is reached, it will essentially rule out a February election and make the end of April or the beginning of May a more likely date for a general election.

Mr Martin wrote to Mr Varadkar almost two weeks ago arguing that the sensible and logical option would be for the 32nd Dáil to continue until the end of the spring term, which would bring it to Holy Thursday, April 9th 2020.

He suggested a short and “doable” programme of Bills that could be passed by the Oireachtas in that period.

In his response on Monday night, Mr Varadkar made a pointed reference to a letter he sent to Mr Martin in August 2018, seeking an extension of the confidence and supply arrangement. Mr Martin never responded to the letter but later agreed to a year-long extension. The Taoiseach, in his response on Monday, suggested an agreement at that time could have dealt with the situation which now existed, where there was no programme.

However, it is understood Mr Varadkar went on to say he did not have a major problem with any of the Bills suggested by Mr Martin, and also suggested a number of Bills emanating from Government as other possibilities.

Meanwhile, former Fine Gael TD Dara Murphy said on Monday evening he would cooperate with any Oireachtas inquiry into his attendance record.

“It remains my intention to establish that I have not broken any rules with respect to my attendance or related expenses paid to me during me time as a TD and vice president and campaign director of the EPP (European People’s Party). I believe it will be possible to find an independent person or process to facilitate this ,” he said in a statement.

“Secondly I would like to reiterate and clarify that I have had, from the very beginning of my time in the role of leading the campaign for Europe’s largest political grouping, the full and unqualified support of Fine Gael.

“I am also happy to provide evidence of this to the agreed appropriate body. I will contact the Ceann Comhairle and Clerk of the Dáil to see how best to progress this very early in the new year.”

In his email to Mr Martin on Monday, Mr Varadkar is understood to have referred to the precarious Dáil arithmetic now faced by the Fine Gael and Independent Alliance coalition. With the resignation of Mr Murphy, Fine Gael and Fianna Fáil have the same number of TDs at 46.

Mr Varadkar did not refer to John McGuinness by name but indicated there was concern that a Fianna Fáil TD might vote against the coalition in a confidence motion. In the email, Mr Varadkar sought reassurance from Fianna Fáil that it would have a contingency plan in place to allow the Government continue should Mr McGuinness not obey the Fianna Fáíl whip.

Among the Bills suggested by Mr Martin was a Bill on electoral and digital transparency drafted by James Lawless, a Bill extending over 70s medical card eligibility, and a Bill on the exploitation of children by drug gangs and people smugglers.