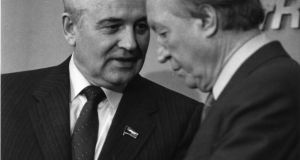 The US feared the Russians could be plotting an undercover Cold War spy base in a disused Cork dockyard, newly declassified government documents suggest. Files released under the 30-year rule show a senior diplomat at the American embassy in Dublin raised Washington’s “worries” about the Soviets using Verolme docks for “military purposes” in May 1989.

The intervention came weeks after top-level meetings between taoiseach Charlie Haughey and USSR president Mikhail Gorbachev and his administration.

Haughey and Gorbachev met at Shannon airport in April that year.

Later the same month, returning from a trip to Japan, the taoiseach stopped off at Sheremetyevo Airport in Moscow for trade and closer co-operation talks, led by USSR deputy prime minister Vladimir Kamentsev.

In a statement to the Dáil afterwards, Haughey outlined the possibility of both sides working together in a number of areas including “fishing and ship repairs . . . particularly in regard to Verolme Shipyard in Cork”.

The Russians suggested “a joint facility in Ireland for ship repair and for change-over of crews, co-operation in fishery research and co-operation in processing and marketing”, Haughey told TDs.

Confidential files just released into the National Archives show Dean Curran, then deputy chief of mission at the US embassy, approached a contact in the Department of Foreign Affairs in May 1989 about the plans.

In a document, marked “Seen by Taoiseach”, the official reported that during a conversation with Curran, the US diplomat “went on to say that he was not speaking officially or representationally but simply conveying, on the basis of our previous contacts, worries which ‘some persons’ in Washington had conveyed to him.”

“These concerned, essentially, the Verolme dockyard in Cork and the possibility that it might be used for military purposes,” the official reported.

“He said that it was well established that the Russian ‘fishing’ fleet in the North Atlantic and elsewhere indulged in many activities which could not be described, by the widest stretch of the imagination, as ‘fishing’.

“His people were acutely aware of this and would like us to know of their concerns. I said that I would note what he had said. He could be assured, however, that neutrality was something which did not work in one way only.”

The Dutch-owned Verolme dockyard, near Cobh, was once the State’s only shipbuilding yard and employed up to 1,500 people at the height of its success.

After years of loss-making and declining orders it closed in 1984.