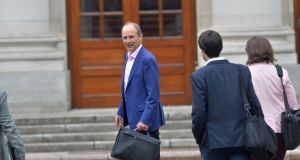 Micheál Martin: presumably both Fianna Fáil and Fine Gael realise that if they are caught again having to impose actual austerity, then the political consequences would be enormous. Photograph: Alan Betson

It has been a case of horses for courses in the slow canter to a new government. In April, Fianna Fáil and Fine Gael produced an impossibly flowery joint proposal document on the next government, designed to get the Greens into the tent for talks.

Now the three parties have come up with an aspirational programme for government, written with a view to getting support from their parties for the plan. If it passes, they will all sit down in the autumn and draw up a budget for 2021 and a national economic plan outlining what they actually believe they can do, when and at what cost.

This is just politics – agree what you have to agree, when you have to agree it. It is also in part framed by the pandemic and what Central Bank governor Gabriel Makhlouf this week called the “fantastic level of uncertainty” about the economic outlook. By autumn the economy will have emerged from the suspended animation of lockdown and we will see the scale of the economic crisis we face in terms of closed businesses, lost jobs and loan arrears among both mortgage holders and SMEs.

Against this difficult backdrop, drawing up the economic plan will be an exercise, to use the old expression, in putting a quart into a pint pot – it simply won’t all fit.

But we need to put this in context. Part of the criticism from opponents of the deal within the Green Party, from Sinn Féin and other left wing voices is that the programme is the road back to austerity, either now or later. You can argue, if you want, that the plan is inadequate,or unfair or will not all be delivered. But austerity is something else entirely.

The Greens learned all about it last time around, after they entered government with Fianna Fáil and the Progressive Democrats in 2007. The economic and financial collapse followed and the government hiked taxes and cut spending in the midst of a recession to cut the budget deficit. That was austerity.

Now the opposite is happening. The country will move from a budget surplus last year to a deficit of some €30 billion this year, a massive injection of State cash, justified by an unprecedented halt in private sector activity. Borrowing will be very high again next year. The national debt is moving to levels which normally would set red lights flashing, but now the super-low interest rates Ireland can borrow at have given us precious leeway.

Borrowing at these kind of levels is about as far away from austerity as you can get. And suggestions that the goal of the programme to reduce the budget deficit each year and eventually move it back “ broadly” into balance in the years ahead guarantees future austerity ahead are wrong, too.

The Irish Fiscal Advisory Council has estimated that €6 billion extra taxes or less spending might be needed over a few years, probably from 2023 on, to get the debt level falling in a reasonable scenario, or €14 billion in a more gloomy one. This compares to €30 billion of spending cuts and tax hikes in the recession after 2008. As well as the different scale of adjustments there is another crucial difference – next time, we hope, adjustments would be undertaken during a phase of growth.

This is not austerity, it is just trying to manage the budget in a way we failed to do in Ireland over many years – saving a bit when times are good to give more leeway to spend when trouble hits.

Presumably the two big centre parties , Fine Gael and Fianna Fáil, realise that if they are caught again having to impose actual austerity, then the political consequences would be enormous. Better to try and ensure that if the cost of borrowing does rise some time after 2021 – and at some stage it will – then we are not caught on the wrong side with a deficit still stuck at crisis levels and pressures to slash borrowing in a hurry.

There is another factor here too. The programme has a range of expensive commitments – investments in areas like transport, retrofitting, housing and energy and higher day-to-day spending in many areas. A return to economic growth will not pay for all these. New revenue streams will be needed.

This isn’t a controversial view. Ireland has a relatively low overall tax take by euro zone standards, though it does vary for different taxes. If, for example, we want to increase people’s entitlements and protections in areas like sick pay or part-time working, then getting the public and businesses to pay more in PRSI is a sensible way to fund this, as the programme suggests. Better healthcare, childcare and so on will also need to be paid for.

A commission on tax and social welfare to be established by the next government will scope this out. It needs to break the link in the public debate, where every suggestion of higher taxes is met with the cry of austerity and therefore condemned as a “bad thing.” A bigger State, paid for by more European-style tax and social insurance levels is a policy choice – a bigger State paid for by borrowing €20 billion every year is not.

How to raise extra revenues is open to debate, but any viable approach is likely to involve the majority of people paying more – including middle earners – even if levies aimed at higher earners and companies might make up some of the gap.

When even the mention of a small increase in the local property tax, the most efficient charge on the main source of household wealth, or of gradual increases in essential carbon taxation brings shouts of the “A” word, we can see that this debate will not be an easy one.