Miriam Lord: Who will get the big jobs if new coalition gets the Green light? 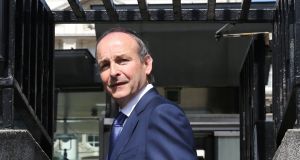 Jobs will be scarce in the new government with so many hungry political mouths to feed and not enough positions to go round. Three parties need to be sated with senior ministerial plums, junior ministerial nosebags, committee chair scraps and Seanad sweeteners.

Party leaders won’t have much leeway when it comes to picking teams. But while predicting the destination of the big jobs is an uncertain science, it’s a sure bet that an awful lot of noses will be out of joint when the names are announced.

If the coalition deal is ratified on Friday by all three parties – and that’s not a sure thing either – the Dáil goes on tour the next day to sit in the novel setting of Dublin’s Convention Centre. The venue can accommodate the 160 members of the Dáil while allowing for social distancing rules.*

It’ll be a unique performance.

There was some talk during the week of a Seanad sitting taking place a few hours later back in Leinster House, once new taoiseach Micheál Martin has announced the cabinet and taken them to the Áras to collect their seals of office.

What’s going to happen there?

President Higgins may be a sprightly 79-year-old, but he has to be careful as he is in the high-risk category for coronavirus. Maybe he will pick up each seal with a pair of kitchen tongs, or one of those long litter picker-uppers, and deliver them to the happy recipients. Or maybe the dogs could carry them over for him. That would be brilliant.

The Saturday Seanad sitting seems unrealistic, although some TDs say it is not beyond the bounds of possibility. However, the Convention Centre has been given a serious interior makeover in advance of the unprecedented sitting, with Oireachtas branding everywhere. It will be like a home from home for the exiles from Kildare Street and the authorities will want to get full value for their outlay.

Ushers and other Oireachtas staff would also have to be redeployed to the Liffeyside venue, which would be difficult.

Moreover, the 11 Taoiseach’s nominees would have to be announced too and then get themselves to Dublin city for the Seanad session. Monday or Tuesday would seem more likely even though the prospect of a Super Saturday sounds very exciting.

The outgoing Cathaoirleach, Fianna Fáil’s Denis O’Donovan, was spotted around Leinster House during the week and is said to be keen to continue in the Chair. However, his fellow Corkonian and outgoing leader of the Upper House, Fine Gael’s Jerry Buttimer, is also said to be interested in taking the Chair.

Still in the frame is former TD Kate O’Connell, one of the women overlooked and not very pleased about it either

There is much speculation over who will get the nod in the coalition carve-up for the coveted 11 seats. One name consistently mentioned in Fine Gael circles is Aisling Dolan, a councillor from Roscommon who ran in the general election but didn’t win a seat. She is well regarded in a constituency which doesn’t have a Fine Gael representative. She is also a woman, which is a big plus for a Taoiseach accused of overlooking female contenders when announcing the party’s nominations for the Seanad elections – 10 men and three women.

Dublin Mid West’s Noel Rock is in with a strong shout for one of those FG seats while Carlow’s Pat Deering is also in contention.

Still in the frame is former TD Kate O’Connell, one of the women overlooked and not very pleased about it either at the time, an able performer who would certainly liven up proceedings. A seat from Leo would be seen as an attempt to build bridges with his occasionally troublesome ex-TD. Emer Currie, the Taoiseach’s running mate, is seen as an outside bet, while people are wondering what Minister for Social Protection Regina Doherty, who lost her seat in February, will do.

Does she know already that she has a seat in the Upper House if she wants it? Because the Meath East politician is also reportedly in contention for the vacant position of general secretary of Fine Gael. However, that job is not a done deal by a long shot. At least two other party insiders are said to be among those who applied by last Friday’s deadline.

Names mentioned include the Taoiseach’s close adviser and head of policy and programme implementation John Carroll. He led Fine Gael’s government formation team. Fine Gael stalwart Laura McGonigle, special advisor to Tánaiste Simon Coveney and a former vice-chair of the National Executive, is also said to be in the mix.

Should Regina decide to stick with politics and keep her profile high in the Seanad, she is not likely to run again in Meath East, where colleague Helen McEntee is bombproof.

Word is that she may move constituency to Fingal to join TD Alan Farrell and take the slot formerly occupied by James Reilly.

A headscratcher of a headline from the northwest’s Ocean FM on Tuesday. Who?

This is the Green Party’s Anna Conlon from Dromahair, one of the county’s most garlanded GAA players and a member of the Leitrim team which won the All-Ireland intermediate football title in 2007, beating Wexford in Croke Park. She is a former club and county Player of the Year.

After the lengthy coalition negotiations concluded on Monday, leader Eamon Ryan praised chef-de-cabinet Conlon as a tireless worker and “the driving force who literally ran the whole thing”. He added he might be biased as Anna used to be his parliamentary assistant before becoming the Greens’ parliamentary political manager. Colleagues describe her as low-key but driven.

The 32-year-old was the Greens’ director of elections this year and is the Greens’ longest-serving staff member, having worked in party HQ and in Leinster House. Besides her passion for Gaelic football, Dublin-born Conlon is also an accomplished singer, dancer and harpist and has a degree in Earth and Ocean Science from NUIG along with management qualifications from Maynooth and DCU.

She once said her “favourite thing in the world is kicking with the outside of my right boot”.

Which must have come in handy during negotiations, although we don’t know if it was brought to bear when Eamon Ryan apparently recited a poem out of the blue to baffled and weary negotiators during one particularly intense late-night session.

Meanwhile, we hear there is some griping in Fianna Fáil circles over what happened at the end of the programme for government negotiations. When the teams finished going through the document line by line and agreed to send it on to the three leaders, everyone applauded, including Neasa Hourigan from the Greens who has since urged colleagues to vote against the deal.

Now disgruntled FFers are asking “What’s the hell was that all about?”

Doctors in the House

There were two doctors involved in the government formation negotiations, both from the same constituency.

The Taoiseach’s medical credentials stood to him well during the coronavirus crisis, although Minister for Health Simon Harris had us reaching for the sick bags when he referred to the Chief Medical Officer and the Taoiseach as “Dr Tony and Dr Leo” at a press conference in Government Buildings a couple of weeks ago.

But news of the other doctor went under the radar back in March because of the sudden panic over the arrival of Covid-19. Fianna Fáil’s Jack Chambers didn’t complete his medical studies when his political career took off. The 29-year-old spokesman on defence, communications, climate action and environment was part of Micheál Martin’s negotiating team and is tipped to land either a junior ministry or the job of Government chief whip if the coalition gets the green light next weekend.

However, back in March, the Dublin West TD also became a qualified medical doctor having finished off his final two exams.

Dr Jack also has an honours degree in Law and Political Science from TCD.

The third medical doctor in this Dáil is former Army ranger and Independent TD for Kildare South, Cathal Berry.

Fianna Fáil councillor Shane Curley made his debut on RTÉ’s Prime Time during the week when he explained why he is voting against the party going into coalition with Fine Gael and the Greens.

The Loughrea-based secondary school teacher, who ran unsuccessfully for a seat on the Seanad’s Cultural and Education panel, is part of the “Fairer Future” group of party members running what they describe as a grassroots campaign against the deal.

Shane looked very dapper indeed when he appeared on screen in front of a glittering backdrop of Galway city by night, prompting Richard Jacob of Cork’s excellent Idaho cafe to post a screenshot of the sharply attired young councillor as he addressed the nation.

“Tonight, I am going to be JFK in the style of Miami Vice” was the caption. Cllr Curley took it well. “One of the main things politics has taught me is that you just can’t take yourself seriously,” he replied.

Also having a giggle were some FF colleagues in Leinster House, who were tickled by what Shane posted on Facebook just before he went on air.

It was a photograph of him sitting at the desk in the studio, all set to go and encouraging people to tune in. He added: “As part of my drive to encourage people to shop local, I’d like to thank Martin Fahy Menswear for the suit [silver grey with navy piping on the top pocket] and to Dervans Fashions Loughrea for the tie [pink patterned] and the shoes (which I promise I am wearing under the table!)