FF still not expressing confidence in Garda chief after questions 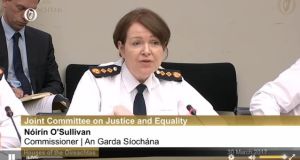 Nóirín O’Sullivan told the committee: ‘This falsification is not confined to traffic data’ 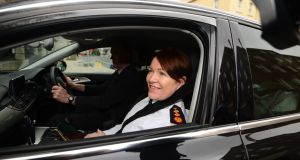 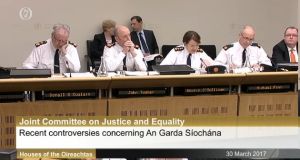 Nóirín O’Sullivan : ‘Those mistakes and wrongdoings are unacceptable in policing terms’

Fianna Fáil says it is still not in a position to express confidence in Garda Commissioner Nóirín O’Sullivan after her appearance at the Oireachtas Justice Committee this morning.

Fianna Fáil justice spokesman Jim O’Callaghan is seeking more information from An Garda Síochána about is investigations into one million breath tests that were recorded but never happened.

“As a result of this morning, we are still unable to express confidence in the Commissioner,” Mr O’Callaghan said.

The party wants more detail on areas such as when exactly An Garda Síochána sought information from the Medical Bureau of Road Safety.

Mr O’Callaghan has asked whether the data was only sought after an article appeared in The Irish Times in February.

Earlier, Ms O’Sullivan had said members of the Garda may have “deliberately” recorded incorrect figures on breath tests that did not in fact happen.

Appearing before the justice committee to answer questions on the latest controversy to hit the force, she apologised for failures in the road breath test system over the past decade.

Mr O’Callaghan had asked what the wrongdoing was in regard to the breath tests that Ms O’Sullivan was referring to in her apology. He asked whether members had “dishonestly” entered false breath test data.

He asked whether it was done in error, or whether “someone picked a number and just entered a number”.

Ms O’Sullivan said the Garda had yet to fully get to the bottom of what happened. “It may well be the case that members deliberately put figures into the system that were not correct figures,” she said.

Fianna Fáil’s Jack Chambers said there must be some “hypothesis about what triggered this enormous cultural failure” that may have allowed false data to be inputted.

In response, Ms O’Sullivan said a “hypothesis” could be that breath test checkpoints were used as preventive measures to stop drink driving, and were perhaps not taken as seriously by gardaí as the detection of crimes was.

“A hypothesis may well be that MAT (mandatory alcohol test) checkpoints are preventive measures,” she said, adding that their main purpose is to change behaviour and “not to catch people”.

“Perhaps it wasn’t as valued as important as it was in terms of detections,” she said.

The commissioner also said, in such a hypothesis, that mistakes may have arisen if the data was recorded 24 or 48 hours after a garda had been on a busy shift.

Mr Chambers asked whether the data on breath tests and checkpoints related to possible bonuses awarded to senior figures in the force.

Ms O’Sullivan said while some “divisional activity targets would be related to traffic...to reduce deaths on the road”, she was not aware whether this was the case with breath tests.

“I am not aware of the bonus. One of the deficits we have is performance management. We don’t know it here today, I certainly I don’t.”

Mr Finn said there was a bonus scheme for senior officers but said each Assistant Commissioner “set their own targets”.

In her opening statement, Ms O’Sullivan apologised “sincerely for the grave mistakes and wrongdoing during the last decade that have led to the two controversies we are here today to discuss”.

“They have raised serious issues about how we managed the service, how certain gardaí operated on the ground and their supervision. Given the scale of these issues, they can’t simply be blamed on one individual or one area. It is a collective failure. From top down to bottom up.

“This falsification is not confined to traffic data. I will ensure that the people responsible at all levels will be held to account.”

Mr Finn said the Garda “mislead the public in terms of our data”. Mr O’Callaghan asked whether data may have been inflated by different Garda divisions seeking to outdo each other.

Mr Finn said there was “never a desire for Garda regions to compete with each other”, adding: “There was never a competition between regions or chief superintendents.”

Mr O’Callaghan asked why the Policing Authority was not informed of the issue. Ms O’Sullivan said it was a “complete oversight” and that it was “notified to the department.”

Mr Twomey said the authority was not notified because of an administrative error on his behalf. Mr Twomey said An Garda Síochána only received the final figures in breath test discrepancies this March.

She said the gardaí had “put in place corrective actions that make us a better service” since the problem first emerged in 2014.

Ms Daly asked if Ms O’Sullivan was aware of the concerns raised by the Medical Bureau of Road Safety.

Ms O’Sullivan said she did not know, and Mr Finn said the engagement with the bureau was largely a procurement issue. The bureau said it raised concerns about a discrepancy between the stocks of breath testing kits and the number of tests recorded as being carried out by An Garda Síochána.

Ms Daly asked how other Garda figures of 400,000 checkpoints could be trusted. Mr Finn said he can “stand over” and “categorically say the recorded figures are for “validated checkpoints” and do not include checkpoints that have not been validated.

On the issue of motorists being wrongly summonsed to court for road traffic offences, Ms Daly said she was summonsed in March for an “alleged motoring offence” that was claimed to have taken place in December last year but did not actually happen.

She also said he had met people in court in Naas, Co Kildare, when she was dealing with her own fixed charge notice, who also did not commit an offence. She said this “belied the narrative” that the problems in the system have been corrected.

Ms O’Sullivan said they would be “happy” to look at Ms Daly’s specific issue, but the Dublin Fingal TD said she was raising the example to highlight how systems had not been fixed.

In a second round of questioning, Ms Daly asked if it is credible that, on the basis of one million breath tests and 400,000 checkpoints over a given period, people should believe that only two and half breath tests were carried out per checkpoint.

In response to Mr Wallace, Ms O’Sullivan said promotions within the force are based on competencies, rather than performance related targets.

Ms O’Sullivan was then asked by Fine Gael’s Colm Brophy if it was acceptable that, having become first alerted to a potential problem in breath test figures in 2014, that An Garda Síochána only fully ascertained the scale of the problem in recent weeks.

The commissioner said she was operating with depleted staffing levels after her initial appointment on an interim basis following the retirement of Martin Callinan.

She also said that there is a perception that An Garda Síochána is a “data rich” organisation that has “systems that at the press of a button that we can produce data”.

“We can’t,” she said, adding that there has to be a huge trawl of records, some of which are paper documents, that have to gathered and analysed.

Independent TD Mick Wallace asked why many people believe Ms O’Sullivan is not the right person for her job.

Ms O’Sullivan said there was a statutory framework by which she can be held to account. The Cabinet can remove a commissioner or the Policing Authority can recommend to the Government that the commissioner be sacked.

Fine Gael senator Martin Conway asked Ms O’Sullivan about her weekend statement that more issues of concern will arise in An Garda Síochána. The commissioner indicated she had no specific information about bad practices.

She stressed the need for good ethics in the force, and tied it to inputting correct data. She said Garda headquarters has been “inundated” over the past week with members of the force saying they realised how serious the latest controversy is.

Mr Conway said the “dogs in the street” do not have confidence in senior Garda management and asked Ms O’Sullivan at what point she would consider her own position.

She said the senior management had all committed to delivering “a modern, professional policing services” and had the “courage and determination” to see through change.

Senator Niall O’Donnghaile of Sinn Féin asked when Minister for Justice Frances Fitzgerald was informed of the breath tests issue, and of the scale of the problem.

He also asked Ms O’Sullivan about the passage of her opening statement, where she said she feared that erroneous date was not confined to road traffic issues.

Ms O’Sullivan said that if and when any problems are identified, the relevant bodies -such as the Policing Authority and the Department of Justice - will be informed.

Fianna Fáil Senator Lorraine Clifford Lee asked if there is kickback at all levels in the force, including at senior management. Ms O’Sullivan said it is important that all levels are brought along with reform.

Ms Clifford Lee also asked if those who are found to have deliberately altered data will be sanctioned.

“If there are people who have found to have erred, or deliberate wrongdoing, yes there will be sanctions,” Ms O’Sullivan replied.

1 Meath farmer discovers overnight rave on his land
2 Coronavirus: 188 new cases and no further deaths amid concern over eight counties
3 Work to stabilise land after ‘suspected tunnelling’ behind terrace could cost €300,000
4 Children removed from care of parents after claims they were ‘stripped and flogged’
5 Britain’s chief medical officers say entire country should move to Level 4
Real news has value SUBSCRIBE