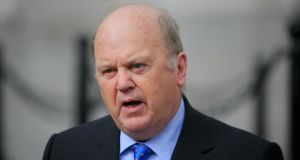 Michael Noonan told the Dáil he absolutely refuted the claims that he and his officials had acted inappropriately in meeting Cerberus. Photograph: Gareth Chaney Collins

Minister for Finance Michael Noonan threatened to injunct the Public Accounts Committee (PAC) for criticising as inappropriate a meeting he had with a vulture fund, committee chairman Seán Fleming has claimed.

Fianna Fáil TD Mr Fleming said that in a private conversation after Mr Noonan’s five-hour appearance before the committee to discuss the sale of Project Eagle, a collection of Nama’s Northern Irish loans, the Minister told him “I can injunct you”.

“You should withdraw that threat. You should apologise to the PAC,” he added.

The Laois TD said “it’s a little bit rich of you to say we didn’t ask questions about something that only you knew about” he said in reference to Mr Noonan’s meeting with the chairman of Cerberus.

In a report on the controversial disposal by Nama of Project Eagle, the PAC criticised Mr Noonan for meeting senior representatives of Cerberus, the US investment firm that was successful in its £1.1 billion bid for the portfolio, shortly before the sale.

Mr Fleming pointed out that there were 101 pages in the report and two pages about the Minister and “you think it’s all about you”. The procedure of holding the meeting with the vulture fund was under criticism.

Fianna Fáil finance spokesman Michael McGrath said the Minister had made an “ill-judged speech” and as the sitting Minister for Finance had launched an unprecedented attack on the committee.

“You have made the very deliberate choice to dedicate the vast majority of your speech to defending your own personal position and that of your department.”

Earlier, Mr Noonan had accused the PAC of ignoring due process in the controversy surrounding his meeting with a large US investment firm on the eve of its bid for Project Eagle.

In a heated debate, he told the Dáil he absolutely refuted the claims that he and his officials had acted inappropriately in meeting Cerberus in March 2014.

He said following a leak and prior to publication of its report, he wrote to the PAC chairman outlining his strong objection to any such findings against himself or his officials.

“I remain shocked that the PAC disregarded due process and did not offer me or my officials the opportunity to discuss the PAC’s concerns, even after requesting such an opportunity prior to the report’s finalisation,’’ Mr Noonan added.

Earlier this month, the PAC concluded it was not “procedurally appropriate’’ for Mr Noonan to meet the firm.

“It is entirely appropriate that I, as Minister for Finance, would meet with the chairman of a major international investment fund, a former US secretary of the treasury, at his request while he was in Dublin on business.’’

He said it was also entirely appropriate that his officials would meet with representatives of a firm which had a general investment interest in Irish assets. Sinn Féin TD David Cullinane accused Mr Noonan of being “very defensive’’ in his remarks.

Mr Cullinane said the Minister had accused him of being a person who did not tell the truth. “I am asking him to withdraw that remark,’’ he added.

Mr Noonan said he was referring to Sinn Féin and not to Mr Cullinane personally.

Gardaí suspect botched murder attempt was bid to avenge Mulready-Woods death 11:56
Election 2020: ‘We all think the health service is a lost cause’ 12:04
Churches urge faithful to exert pressure on politicians over housing 11:53
GRA says lack of resources will leave gardaí ‘without armed backup’ 11:49
Clothing and footwear seized in Cameron Blair murder inquiry 11:08
SUBSCRIBER ONLY