Farewell to Liam Cosgrave a State funeral in all but name 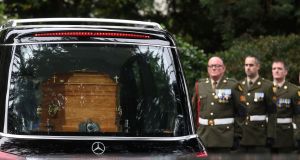 The funeral of former taoiseach Liam Cosgrave at the Church of the Annunciation, Rathfarnham, Dublin. Photograph: Nick Bradshaw 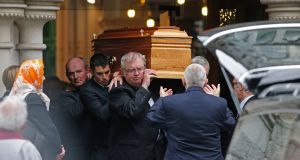 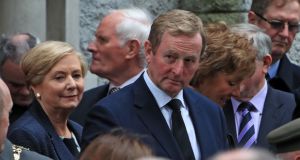 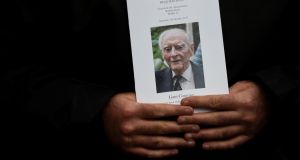 An order of service is held by a mourner at the funeral Mass on Saturday. Photograph: Clodagh Kilcoyne/Reuters

When Liam Cosgrave’s beloved wife, Vera, predeceased him, he contacted his friend of long standing, Msgr John Wilson, to discuss the funeral arrangements.

“There’s to be no speeches and no nonsense,” the former taoiseach said.

And so it was, that in like manner, Msgr Wilson said on Saturday at Mr Cosgrave’s own funeral, his wishes would be honoured once more.

This was a State funeral in all but name.

The large, sturdy granite Church of the Annunciation in Rathfarnham, Co Dublin, was packed with the great and good of Irish public life, past and present.

National institutions, including the Oireachtas and the Cabinet, the Defence Forces, Garda Síochána, judiciary and political parties, but especially Fine Gael, were well represented among the 600 or so people who f

President Michael D Higgins, who is out of the country, was represented by his aide de camp, Col Michael Kiernan. Taoiseach Leo Varadkar was accompanied by his, Capt Deirdre Carbery.

When the coffin arrived at the church, met by the Archbishop of Dublin and Primate of All Ireland, Dr Diarmaid Martin, it was carried inside by a bearer party from the 2nd Brigade Military Police Company.

In keeping with family wishes, the funeral was also a low key affair whose proceedings were sombre and traditional, having in them a whiff of the formal and the austere, reflecting the public persona of the man around whom they were centred and whose political times today appear as though from a black and white Pathé

The plain wooden coffin was dressed with neither flag nor flowers. Those that were in the church, altar displays of white chrysanthemums and small yellow carnations, were there pro forma, rather than for the particular occasion.

There would be no hymn singing, no soloist, no symbols brought forward to reflect a life of 97 full years, lived activity and to significant achievement.

The coffin entered the church to the organ softly playing Abide With Me. During Holy Communion, the silence was broken by the organ playing The Lord is my Shepherd, but also Morning Has Broken and Ennio Morricone’s Gabriel’s Obo – a small token of contemporary spirituality.

Liam Cosgrave was a man of “solid and practical faith”, said Msgr Wilson, whose friendship with the former taoiseach predated Fr Wilson’s taking Holy Orders in 1979 and was rooted in a shared love of hunting. (“We didn’t catch too many mongrel foxes,” the priest quipped to general amusement among the mourners – a throwback to one of Mr Cosgrave’s more colourful descriptions of his critics.)

Describing Mr Cosgrave as a “true and faithful Catholic”, Msgr Wilson said: “He was a devout, committed Catholic, very like his father before him. He carried his faith easily. It was never a burden, simply part of who he was and it was not in any way exclusive. Numerous of his friends were of other Christian denominations and [he was] a man with the greatest respect for the faith and beliefs of others.”

Msgr Wilson referenced St John of the Cross, the 16th-century Spanish Carmelite mystic, who declared that when a person died, they would be judged on how they had loved.

“Liam Cosgrave loved his family,” said Msgr Wilson, “he loved his country, he loved his faith and he was a patriot in the very best sense of that term and he can be sure that the Lord will greet him with the words, ‘You have done well, good and faithful servant, inherit the kingdom prepared for you since the foundation of the Word.’”

The readings were from the Book of Wisdom (“the souls of the virtuous are in the hands of God”) and the first letter of St John (“think of the love that the Father has lavished on us”) read by, respectively, Ciaran Cosgrave and Mary Cosgrave, two of his children.

The hunched-over figure of Liam Cosgrave jnr approached the lectern and when he spoke, the voice that echoed around the huge church could have been that of his father.

“Dad was not the biggest fan of eulogies,” he said in what was almost certainly a huge understatement, “so I’m not going to do anything today to upset him. Or indeed upset ye.”

He went on to thank the carers, the doctors, nurses and his GP, Dr Bill Twomey, and the staff at Tallaght Hospital who had cared for his father as he declined.

He wished to acknowledge also, he said, the “great support” given to his father by the members of An Garda Síochána. “He was a great supporter of theirs,” said Liam jnr, “and they returned it tenfold.”

To the chief of staff of the Defence Forces, Vice-Admiral Mark Mellett, and other senior officers present, he said the former taoiseach had “a great affinity with the Army”, and it was “great to see them here with him to the very end”.

His father gave his family affection, kindness, love and loyalty in abundance. One of the last things to bring a smile to his face was news that his grandson William had passed his driving test – “albeit by a short head”, said Mr Cosgrave to laughter.

Sending the former taoiseach to Goldenbridge Cemetery where he was laid to rest, Archbishop Martin quoted John Henry Newman: “Go forth, Christian soul from this world in the name of God the Almighty Father who created you.”

And as they shuffled out of the church quietly, old friends and political foes sharing memories of a seemingly dour man, a taoiseach tested more than most by forces that sought to destroy, but who in private was quick and witty, the organ played Nearer my God to Thee.