Support for capital spending consistent among supporters of all parties 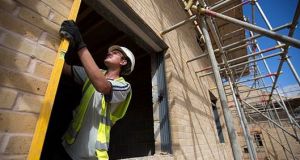 “Spend more on building houses, schools, hospitals and other infrastructure” was nominated by 52% of voters. Photograph: Getty Images

The poll finds a clear majority of voters favours capital investment in housing, schools and hospitals over other budget options such as tax cuts and pension increases.

Asked for their choice on a series of priorities for the budget, more than half of all respondents (52 per cent) said they believed the Government should “spend more on building houses, schools, hospitals and other infrastructure”.

Voters were told that the Government had limited additional funds for next week’s budget, and were asked to give one priority from a short list of policy options.

By far the most popular option, nominated by 52 per cent of voters, was “spend more on building houses, schools, hospitals and other infrastructure”.

Support for this option is consistent amongst all parties’ voters, with Fine Gael supporters (53 per cent) only marginally less favourable to the proposals than Sinn Féin voters (55 per cent).

Most of the budget preferences in the poll displayed a high degree of consistency across the voters of different parties.

Reducing taxes for middle-income people is the second most popular budget priority, though with 22 per cent of respondents nominating it as their top priority it is less than half as popular as the capital spending option.

Fianna Fáil supporters are, at 25 per cent, more in favour of tax cuts than other parties’ voters, though they are only marginally less enthusiastic than Fine Gael voters, 23 per cent of whom favoured tax cuts as the top priority.

Voters in the highest income cohort were most in favour of tax cuts.

Spending more on public services was favoured as the top priority for 9 per cent of voters, the same proportion as those who want the Government’s first priority to be spending more on welfare, such as pensions.

Despite warnings from the ESRI that the Government should produce a conservative budget, just 6 per cent of voters said it should “keep spending to a minimum and save for a possible economic downturn”.

The poll was conducted on Monday and Tuesday of this week among a representative sample of 1,200 voters aged 18 and over in face-to-face interviews at 100 sampling points in all constituencies. The margin of error is plus or minus 2.8 per cent.