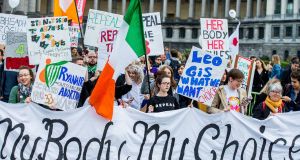 The Government and the Oireachtas are likely to decide early next year the wording of a referendum, with a vote expected to be held next May or June. Photograph: EPA

There is a strong desire to change the current regime of dealing with abortion in Ireland, a pro-choice group claimed in response to the findings of the latest opinion poll.

However, it was also claimed the poll from Ipsos MRBI for The Irish Times was designed to influence people in favour of a “restrictive” abortion regime.

The poll found Irish voters would prefer a referendum to allow a limited liberalisation of the law on abortion and would back such a proposal, but would reject any plans to allow for abortion in all circumstances.

The Government and the Oireachtas are likely to decide early next year the wording of a referendum, with a vote expected to be held next May or June.

Given two options for a referendum – a vote allowing limited access to abortion, such as in cases of rape, fatal foetal abnormality and a threat to the life of the woman; or a vote providing for general access to abortion up to 22 weeks – voters express a clear preference for the more limited option.

More than half of voters (57 per cent) favour the more limited version of the referendum. By contrast, less than a quarter of voters say that they are in favour of holding a referendum on allowing abortion in all circumstances up to 22 weeks.

Ailbhe Smyth of the Repeal the Eighth movement said that “while the questions were limited”, the results back up the outcome of the Citizens’ Assembly, where she said more than 90 per cent supported abortion in order to protect women’s health.

“This shows, once again, the strong and consistent public demand for repeal of the Eighth Amendment to enable the legislature to finally deal with this issue and to provide legal access to abortion in Ireland,” Ms Smyth added.

“The Irish Times has released a skewed poll claiming to show people only want Repeal based on restrictive abortion provision. Once again, The Irish Times fails to even ask people if they support a woman’s right to abortion on health grounds,” she said.

“This is the latest in a series of ‘push polls’ designed to generate a particular answer by asking a particular question – in this case to ‘prove’ that the public only supports widening abortion access on grounds of rape and fatal foetal abnormalities.”