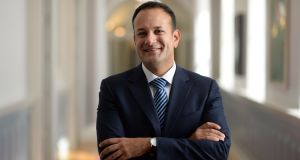 The Government wants to keep a free trade area between Britain and Ireland after Brexit, Taoiseach Leo Varadkar has said.

Mr Varadkar told the Dáil the Government has “fall-back positions” if negotiations between the UK and EU do not lead to such an outcome.

He said Ireland is “determined to secure a customs union partnership and a free trade agreement or area between Great Britain and Ireland when it comes to the post-Brexit scenario”.

As part of this, Ireland, as well as Northern Ireland, could seek a special arrangement from the EU after Brexit.

Responding to a question from Fianna Fáil leader Micheál Martin, Mr Varadkar said it is the Irish Government’s “preference and our negotiating position that we should maintain free trade in merchandise and services between Great Britain and Ireland”.

The Taoiseach has previously suggested a customs partnership between the UK and EU to avoid a hard border on the island of Ireland, and has also called on Britain to remain in the European single market.

“This is particularly the case for the agrifood sector so we are determined to secure a customs union partnership and a free trade agreement or area between Great Britain and Ireland when it comes to the post-Brexit scenario.

“We do not want to sacrifice or give up our free trade with Great Britain at this stage so that is very much our position. Of course, we have fall-back positions if things do not work out.”

He said it would not be in Irish interests for him to outline the fall-back position publicly because it “would all be transmitted to the people with whom we are negotiating”.

Mr Varadkar added that the Government “certainly” does not “rule out seeking special arrangements for Ireland and Northern Ireland but that is not our negotiating position or preference by any means”.