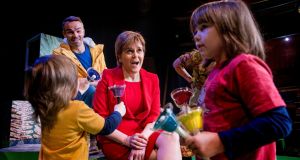 It’s just after 7.30am on a cool crisp Friday morning in Dublin, but already Scottish first minister Nicola Sturgeon is well into her day. She addressed a Dublin Chamber event the previous evening, but there is no time to rest on her laurels.

In a little over half an hour she will be on her way to another business breakfast followed by a visit to The Ark in Temple Bar. Then, in late afternoon, she returns to Edinburgh after a busy two-day visit to Ireland, which included her first one-on-one meeting with Taoiseach Leo Varadkar.

True to the whistle-stop nature of her visit, The Irish Times interview is business-like. It takes place in the fashionable Marker Hotel in the Grand Canal Basin. The Scottish National Party leader is dressed in a sober red suit, her hair cut in a stylish bob. She is friendly but succinct, all of the responses to the point without too many frills or flourishes.

That said, she is happy with her meeting with Varadkar, and is delighted he will visit Edinburgh next year, where she says she will be happy to show him the sights.

She also expands on the links between two Celtic countries, with bonds of language, culture and identity.

On the latter point, like other political leaders in Europe, and particularly in the UK and Ireland, Sturgeon finds herself approaching a constitutional crossroads just now.

As the so-called “national question” determined politics here for most of the last century, the same big existential issues have come to dominate political life in Scotland over the past decade in particular.

Nothing illustrates that more obviously than the rise of the Scottish National Party. It has become the established party of government in its own parliament at Holyrood. In addition, it had spectacular success in the Westminster elections in 2015, taking 56 of the 59 seas.

That said, it has not been a straightforward trajectory of electoral success for the SNP. The gains of 2015 were reversed in the Westminster elections this year, when the party lost 21 seats, including that of former leader Alex Salmond.

More fundamentally, the 2014 referendum on independence was a huge setback, and it was lost by a bigger margin than had been expected.

Sturgeon (47) has been Scottish first minister and leader of the SNP for almost three years now. Her party has a mandate to hold a second referendum on Scottish independence but has yet to make a decision on the timing and the circumstances of that vote. The second referendum was prompted by another existential issue emerging, namely Brexit.

Inevitably that was a big theme of her meeting with the Taoiseach, where there was a “very good discussion” about the mutualities of approach open to Scotland and Ireland.

She said both countries would want to see the United Kingdom stay in the Single Market and the Customs Union.

“I suppose [it would be better] economically for Scotland and it would help resolve some of the issues in Ireland as well.There is a commonality of approach between Irish and Scottish governments.”

Sturgeon accepts that Brexit will happen, but she says Scotland will seek different options to the rest of the UK in terms of its relationship with the EU if it is in its interests and if it is possible.

“I don’t want to accept that we have to accept the fate that is imposed on us. We will be open to exploring different arrangements that might be possible for Scotland. Pragmatically we face a difficulty just now. The negotiations are between the UK and the EU, and there is not a parallel negotiation with Scotland.

“As this develops I will also be looking at opportunities to protect Scottish interests. It will include, if possible, special or different relationships between Scotland and the EU. All options in my mind are very much on the table.”

She said Brexit would change the dynamic of the relationship between Scotland and Ireland, but mostly in a positive way.

“One of the things it has done is strengthened even further the relationship between Ireland and Scotland. It makes the relationship even more important than it was before. I am certainly keen to build the ties, principally the economic ties. Ireland is Scotland’s sixth biggest export market already.

“The challenges that Brexit presents, and the need to work very hard to build up the relationship, is greater than it has been. That is something coming from circumstances we did not ask to be in. It presents an opportunity for us, and it’s one I am determined to take.”

So how will that play into the SNP’s intention to hold a second referendum on independence?

“We will consider when we get to the end of this process of negotiation what the timing for a Scottish referendum would be. We need to allow the dust to settle

“To some extent, things in the UK as a whole are very uncertain and up in the air. Scotland is in a position where we do not want to leave the EU. It brings to the fore some pretty fundamental issues as to how we are governed as a country and who decides the direction of travel we take. That’s certainly an issue that will continue to be debated.”

She said the SNP had won a mandate for a referendum in this term. “We decided we would not take a decision on the timing of that until the decision on the Brexit was a bit more clear than it is now.

“We would expect some greater clarity towards the end of next year. Ahead of the exit date in 2019 there has to be a clear sense of the future relationship.”

The events that occurred in Catalonia over the past week would have struck a chord in both Scotland and Ireland. Sturgeon ventures a view on the process, rather than the substance of what is being debated.

“What I do think just now is there must be a process of dialogue to try and resolve the situation Catalonia is in just now. The Spanish government maintains that the referendum was not legal in line with its constitution. If that is the case there has got to be dialogue about how the people of Catalonia can legally express their view about the future of their country.

“That right to choose is surely fundamental. I hope there is a process of dialogue now that, in line of the rule of law and democracy, also allows the people of Catalonia to decide the future of their country.”

The visit of Varadkar to Scotland next year is one which she anticipates eagerly. “I know he will enjoy visiting Edinburgh, and I will enjoy showing him the sights of Edinburgh.”

Sturgeon emphasises the totality of relationships between the two countries, pointing to the strong cultural and societal links. Her visit to Dublin had a trade focus but she also had time to visit the children’s cultural centre The Ark to see Scottish performers in an event there.

“I have spent all my adult life in Glasgow. You see every day the illustration of the deep links between Glasgow and Ireland. You see the opportunities to build on [those links] for a new generation.”