Politician turned down a State funeral and requested ‘no speeches, no nonsense’, mourners told 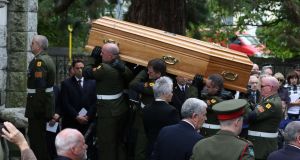 Military Pallbearers carry the coffin into the church at funeral of former taoiseach Liam Cosgrave at Church of the Annunciation, Rathfarnham. Photograph Nick Bradshaw 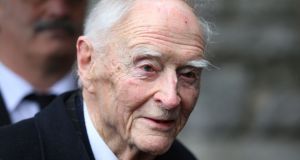 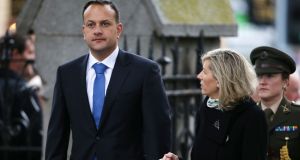 Taoiseach Leo Varadkar arrives for the funeral of former taoiseach Liam Cosgrave, at the Church of the Annunciation in Rathfarnham in Dublin. Photograph: Niall Carson/PA Wire 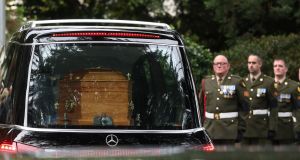 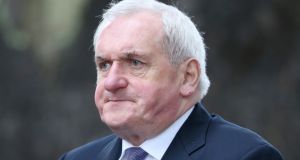 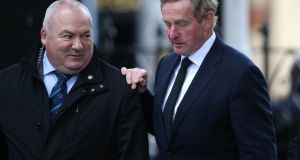 Integrity was the hallmark of Liam Cosgrave’s private and professional life, mourners were told at the former taoiseach’s funeral Mass on Saturday.

“He loved his family and his country,’’ chief celebrant Monsignor John Wilson, a personal friend for over 50 years, added.

He had turned down a State funeral and requested a simple funeral Mass at his local church, the Church of the Annunciation, Rathfarnham, Dublin, where he worshipped for over 80 years.

He attended daily Mass there up to three months ago, sitting unobtrusively at the rear of the church. Neighbours recalled the friendly greeting from the humble elder statesman as he blessed himself with holy water from the stone font dating back to penal times.

Monsignor Wilson said Mr Cosgrave had said to him he wanted “no speeches, no nonsense”.

He spoke of Mr Cosgrave’s strong Catholic faith and his love of Rome. He said they were friends since 1965, having met through a shared interest in hunting. “We caught no mongrel foxes,” said Monsignor Wilson, to laughter from the congregation, in a reference to a controversial speech made by Mr Cosgrave about his political rivals when he was Fine Gael leader.

He referred to the former taoiseach’s humility, never seeking preferential treatment whether at home in Ireland or in Rome.

“Liam left our country a better place as a result of his life and his life’s work,’’ he added. The Fine Gael politician was taoiseach from 1973-77.

He said his old friend was “a patriot in the best best sense of that term’’.

Mr Cosgrave’s son, Liam jnr, said his father disliked eulogies. “So I won’t upset him or you,’’ he added, to laughter from the congregation.

He thanked those who had cared for him, referred to his father’s admiration for An Garda Síochána and the Army, to his long life and how his family would miss him. His remarks were greeted with sustained and loud applause from the congregation.

A tricolour in the church grounds flew at half-mast as a large crowd gathered for the funeral service.

Ten military policemen carried the late taoiseach’s coffin from the hearse to the church and, at Mr Cosgrave’s request, it was not draped in the tricolour.

Also at his request, there were no hymns, while organist Marie Cruise played some solemn music.

The readings were by the late taoiseach’s daughter, Mary, and his son, Ciarán.

To the strains of Panus Angelicus, the coffin was shouldered from the church by family members to the hearse and his body was then taken for burial in the family plot in Goldenbridge Cemetery, Inchicore, where his father, William T Cosgrave, a key figure in the foundation of the Irish Free State, was buried in 1965 after a State funeral which included Mass at the same church.

When his son was told of the cost involved at the time, he insisted the family pay for it.

The former taoiseach’s wife, Vera, who predeceased him, is also buried there.

His funeral cortege was met in Goldenbridge by the Army Number 1 band ,and Caoineadh´, a traditional Irish air, arranged by Lt Col Brendan Power, former director of the Defence Forces School of Music, was performed.

Buglers and a drummer from the Band of 2 Brigade performed The Last Post and Reveille following the burial ceremony.

Taoiseach Leo Varadkar was among the dignitaries at the Mass as were former taoisigh Enda Kenny, John Bruton, Brian Cowen and Bertie Ahern.

President Michael D Higgins, who is abroad, was represented by his aide-de-camp Col Michael Kiernan.

The three surviving members of the cabinet he led in the 1970s, Richie Ryan, Paddy Cooney and Tom O’Donnell, also attended. Members of the current Cabinet were present, as were ormer Fine Gael leaders and ministers, Michael Noonan and Alan Dukes.

There, too, were Fianna Fáil leader Micheál Martin and Labour leader Brendan Howlin.