Fact check: Does one in every five pregnancies in England end in abortion?

Save the 8th makes claims about English abortion regime on posters 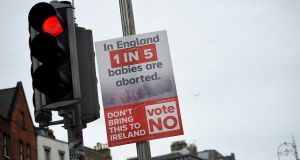 Does one in every five pregnancies in the UK end in an abortion?

The Save the 8th campaign, which opposes the repeal of the Eighth Amendment, makes the claim on one of the group’s posters and in other campaign material. It states that, in England, 1 in 5 babies is aborted. The campaign uses the word “babies” as it considers that life begins at the moment of conception.

What are they basing their claims on?

Campaign spokesman John McGuirk says the statistic is something called “the abortion ratio”, which he says “is widely used internationally when discussing abortion”.

Although the poster references only England, the one-in-five figure is based on the 2015 figures for England and Wales and McGuirk says the group “verified it from the Journal’s fact check”. He is referring to an article from the Journal.ie news website.

McGuirk explained that the figures do not take account of the number of pregnancies that end in miscarriages. Using miscarriages in the figures would be wrong as the “purpose of an abortion is to prevent a live birth”, he said.

He added: “The assumption that miscarriages would alter the stats is based on the idea that those who miscarry would have abortions at significantly lower rates than those who did not – and there is no evidence for that.”

The claim varies between Britain and England in literature and on posters.

For England and Wales, figures from the Office of National Statistics say there were 692,271 live births and 3,112 stillbirths in 2016.

In that year, the UK Department of Health says 190,406 pregnancies were terminated. As a percentage of recorded pregnancies (live births + still births + abortions), one in five pregnancies, or 21 per cent, ends in an abortion.

In Scotland, the National Record of Scotland says there were 54,488 live births and 236 still births. In that year, 12,063 terminations were carried out. This allows us to calculate that 18 per cent of all pregnancies end in a termination, but remember this percentage is calculated without knowing how many pregnancies ended in a miscarriage.

In Northern Ireland, 24,076 live births and 13 terminations took place between April 2016 and March 2017. Figures for still births and miscarriages were not available.

The figures above combined suggest there were 976,865 pregnancies in the United Kingdom. A total of 202,482 of those resulted in the termination of the pregnancy, which equates to 20.73 per cent, which is one in five.

There is also the added complication that the number of terminations carried out in the UK in 2016 were in relation to women who had travelled there for an abortion, including 3,265 from Ireland.

Therefore it is unclear if one in five pregnancies in England (or Britain) results in abortion.

It is unclear if one in five pregnancies, in either England or the UK as a whole, ends in an abortion.