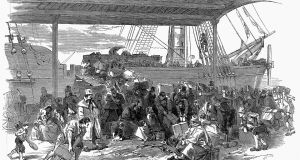 The extent of British government discomfort at commemorating the 150th anniversary of the Irish Famine is revealed in previously confidential files released today in Belfast.

Senior British officials regarded a decision by then minister of state Avril Doyle to press ahead with a concert in Liverpool in 1996 as “very awkward”.

Confirmation that the concert was going ahead came after prime minister John Major vetoed any official British participation in a proposed ecumenical service to mark the Famine anniversary.

The decision by Mr Major – originally revealed in archival papers declassified in London last year – coincided with the breakdown of the IRA ceasefire in February 1996.

The latest files show plans had been well advanced for the event, due to have been attended by president Mary Robinson, before opinion within the British government shifted.

Ultimately, Mr Major decreed that the planned ecumenical service in Liverpool involving members of the British government and royal family “would look like an apology for the Famine” and would offend unionist sensitivities in Northern Ireland.

The possibility of a British event to mark the Famine had been raised in August 1994 by Chris Maccabe of the Northern Ireland Office (NIO) political affairs division.He informed his colleagues that the Anglican rector of Liverpool, Canon Nicholas Frayling, was planning “a service of contrition” in Liverpool Anglican Cathedral next year at which “Britain can express its deep regret for its treatment of Irish citizens 150 years ago”.

The official continued: “To the Canon’s disappointment, I was less than enthusiastic. . . making the point that the dreadful events of the 1840s must be seen against the laissez-faire background of the time”. Maccabe felt that such a service could “stir up more emotion than it spent”.

His memo drew a response from Tony Canavan of the NIO who, writing on August 19th, 1994, felt that “in adopting a defensive posture on the likely criticism of the British record in Ireland during the Famine, it would be necessary to strike a balance between two extremes”. These were the radical nationalist version of events which accused Britain of committing genocide and a more benign explanation.

However, the official warned of the danger of endorsing “the revisionist view. . . that government action to assist the famine victims was simply alien to mid-Victorian thinking”. Canavan nurtured “the strong suspicion that London would have reacted differently to a similar agricultural catastrophe in Wiltshire”.

By October 1995, the debate had been joined by the British ambassador to Ireland, Veronica Sutherland. In a despatch to NIO ministers, dated October 23rd, 1995, the ambassador noted that the taoiseach [John Bruton] had appointed Doyle to co-ordinate commemorations of the Famine in the Republic.

She had attended several events including an ecumenical service in Tuam, Co Galway. The organisers of these occasions had expressed appreciation for British interest in their work. Sutherland added: “None of them had suggested that any formal apology by the British for the events of 1845-49 is called for.” The only demand for an apology had come from Bertie Ahern, the Fianna Fáil leader, and it was ridiculed as an attempt to rouse republican support, the note read.

Impressed by the Irish government’s approach, the ambassador invited Doyle to dinner and the minister of state had suggested an ecumenical service in Liverpool Cathedral, similar to the one held in Tuam. The ambassador felt the idea had many attractions. She noted that Archbishop Lord Eames had given the address at Tuam and stressed the need for reconciliation.

Sutherland recommended the idea of a service in Liverpool: “It would be an effective way of acknowledging the past without engaging in a fruitless exercise of apology.”

The ambassador’s suggestion drew a positive response from the Northern Ireland secretary, Sir Patrick Mayhew, who felt it “might do a lot of good”.

As time went on the mood began to change, however, and on January 16th, 1996, NIO official Peter Bell informed colleagues that he regarded the proposal with “dismay”. In a heavily-redacted memo, he wrote that by hosting such a service, the British government risked “perpetuating the Republican view of Irish history that the great problem is Britain’s relationship with Ireland whereas, in fact, it is the relations between the two communities within Northern Ireland”.

Bell’s concerns were shared by the then British foreign secretary, Malcolm Rifkind, who feared “provoking recriminations against Britain from Irish Nationalists”.

Fresh difficulties arose in February 1996 when an NIO official reported that he had found the leading Protestant churchmen, Archbishop Eames and the Presbyterian moderator, Dr John Ross, “unenthusiastic” about the idea. Eames recalled that he had been criticised by Northern Anglicans for his involvement in the ecumenical service at Tuam and had found this a “chastening” experience.

This development, coinciding with the breakdown of the IRA ceasefire at Canary Wharf, prompted the Northern Ireland secretary to withdraw his support. In a letter to Rifkind’s private secretary, Dominick Chilcott, dated February 1996, Mayhew’s private secretary stated that not only was Lord Eames opposed to the service but he feared that the Bishop of Liverpool would favour a highly “penitent” service with HMG [her majesty’s government] taking the role of penitent. The event threatened “to do more harm than good”.

The last word was left to the prime minister. In a note to the foreign office on March 9th, 1996, Major’s private secretary, Edward Oakden conveyed the prime minister’s outright opposition: “Whatever we say, government (and arguably royal) attendance at such a service would look like an apology for the Famine and revive debate about whether we owe such an apology . . . The Unionists are unlikely to sympathise.”

The issue surfaced again when Doyle, on behalf of the Irish government, invited the British ambassador to Ireland, Sutherland, to a concert to commemorate the Famine anniversary in Liverpool.

In July 1996, Sutherland informed the NIO that she had spoken to the Irish minister and “Mrs Doyle was insistent that it would be counterproductive to cancel the concert at this stage. The unfavourable comment this would attract from a wide range of people would stir up much more controversy than a cultural event such as this.”

The ambassador saw the force in Doyle’s arguments, but made it clear that inviting British ministers would not be appropriate “particularly given recent events in Northern Ireland”. Sutherland said she herself would be willing to attend, subject to approval from London.

The ambassador’s letter clearly caused consternation. Senior NIO official Sir John Chilcot wrote in hand: “This is very awkward. HMG will most certain not want this to go ahead, still less to give it official approval.”

A note from Donald Lamont at the British foreign office’s Republic of Ireland department conceded that attending a concert would involve less “British self-flagellation” than a religious service. However, the official still argued against the ambassador accepting Doyle’s invitation.

In the event both Sutherland and Doyle attended the Famine concert at the Liverpool Philharmonic although the city’s Irish community complained about having been virtually excluded from the preparations. The concert took place in September 1996, nine months before the new prime minister Tony Blair said that those in power in London had failed the Irish people by not intervening during the Famine.