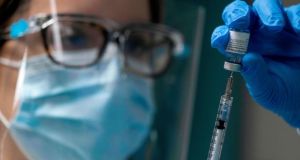 A nurse prepares a dose of the Pfizer-BioNTech Covid-19 vaccine in Puerto Rico. Photograph: Ricardo Arduengo/AFP via Getty

An appeal has been made in the Dáil for a major campaign to combat anti-vaccination misinformation after revelations that leaflets that “look exactly like” HSE advice sheets are being distributed in North Dublin.

Sinn Féin enterprise spokeswoman Louise O’Reilly said she was “deeply, deeply troubled” that these “very slick” leaflets were being dropped in Balbriggan in her Dublin Fingal constituency.

She said “they say there’s no need for a vaccine” that “’of course there’s no virus’”.

“A lot of money went into them. They look exactly like the SHE leaflets, like the advice we get in the door.”

As preparations continue for the roll-out of the vaccine once approval, expected on Monday is given by the European Medicines Agency, Ms O’Reilly said that “anti-vaxxers” are targeting working-class areas.

Imploring Minister for Health Stephen Donnelly to create a comprehensive vaccination awareness and uptake campaign, she said “there’s no point in us all saying ‘well you should just get the vaccine’ and wagging our fingers at people”.

Ms O’Reilly said “I was straight up frightened when I saw the state of these leaflets,” because they looked exactly like HSE information.

Ms O’Reilly was speaking during a Dáil debate on the Covid-19 vaccination taskforce at which some TDs were criticised for their public scepticism about the vaccine.

Fianna Fail TD James O’Connor said “it is absolutely outrageous that we have members of this House who are willing to come in here and pander to message of anti vaxxers. It’s disgusting.”

Stressing the importance of inoculation programmes as a “major part of the eradication of multiple diseases”, the Cork East TD said “the message from Government has to be absolutely clear”.

He said “the Covid-19 vaccine has seen more investment than any other vaccination in history”.

He said he told media when asked if he would take the vaccine that he would not “until I knew what I was taking and I am still strongly of that view.”

“I am convinced that if we can explain this issue and allay some of the fears that are out there, if it is humanly possible to do that, then that 30 per cent could be 20 per cent or 15 per cent.”

Minister of State for European Affairs Thomas Byrne said that 70 per cent of the population needs to be vaccinated to get to the end of the pandemic and it would be a substantial task to make sure this happens.

He said it was important to give as much clear information as possible on vaccines to counter disinformation and he hoped that there would not “insulting talk about risks.

“There are always risks but a greater risk has been taken on by many ordinary men and women in clinical trials. They have paved the way for the rest of us.”

In the wake of increased Covid-19 cases in schools, he said that they are in contact with more people than most like bus drivers and other transport workers.

He added that most of the time they may observe social distancing but could not maintain it all the time and should be high on the priority list for vaccination.