Five names to be forwarded under new judicial appointment process 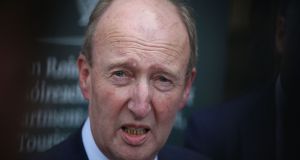 Shane Ross: “It appears the Government has learned absolutely nothing from the Séamus Woulfe appointment.” Photograph: Nick Bradshaw

Minister for Justice Helen McEntee has said her proposed Judicial Appointments Commission will recommend the names of five people it considers suitable for vacancies on the bench, with the Government then deciding which of them will be appointed.

The number is a reduction from the current Judicial Appointments Advisory Board (JAAB) which is obliged to forward seven names of lawyers to the Minister for Justice for each vacancy.

Ms McEntee also made a personal commitment to discuss all five names with the Taoiseach, the Attorney General, the Minister for Finance and the leaders of other Coalition parties.

This will mark a departure from her approach to the appointment of Séamus Woulfe to the Supreme Court, where she discussed only the name of the former attorney general with Taoiseach Micheál Martin, her party leader Leo Varadkar, Green Party leader Eamon Ryan and Attorney General Paul Gallagher.

It later emerged that a number of judges had expressed an interest in the vacancy but their names had not been mentioned by Ms McEntee to her senior colleagues.

Speaking at Government Buildings, Ms McEntee outlined the general scheme of the Judicial Appointments Commission Bill 2020, which was approved by Cabinet on Tuesday.

The new body will comprise nine members including the Attorney General, who will not have a vote. The remaining eight members will be evenly split between the judiciary and lay people. The Chief Justice will chair the commission but will not have a casting vote. If the commission is deadlocked, it will be asked to retake the vote.

However, former Independent minister Shane Ross who tried unsuccessfully to steer reform of judicial appointments in the last Dáil was harshly critical of the proposal.

“JAAB mark 2 is being set up,” he said. “The same person is in the chair of both, and it appears the Government has learned absolutely nothing from the Séamus Woulfe appointment.

“Judges are in the ascendant. Lawyers are in the majority. Do you believe the presence of the AG won’t have an influence?

“There is a legal chair and a legal majority and a judicial block on any appointments, no-one can get through without judges recommending them. They’ll be very happy with this arrangement.

Referring to the Cabinet Handbook which governs how the process of judicial appointments is handled by government, Ms McEntee said at present it is open to interpretation.

“We may have to change the handbook if we want to make it a clearer process on how those meetings occur or how those conversations happen.

“It would be my intention that all five names would be discussed or agreed between [the most senior figures in government] and [then] one name will go to Cabinet.”

Irish-born Patrick O’Brien, a senior lecturer in law at Oxford Brookes University, said the new proposed system was “more modest, smaller and less complicated” than the one proposed in the 2017 Bill . “I think it is the right way to be going.” However he cautioned that the transition to a more structured way of appointing judges was not without its dangers and said the initial effect of the introduction of an appointments commission in England and Wales had been a reduction in diversity on the bench.