Taoiseach Micheál Martin, responding to Richard Boyd-Barrett TD in the Dáil, has said that the "banks were not bailed out" during the economic crash. Video: Oireachtas TV 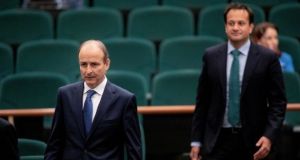 Varadkar (right) told the Dáil that the Taoiseach Micheál Martin “meant to say” that the banks’ owners, the banks’ shareholders were not bailed out. File photograph: Maxwells

Taoiseach Micheál Martin has said he “misspoke” when he told the Dáil on Wednesday that the banks did not receive a bailout.

The Taoiseach, in an interview with The Echo on Thursday, saying: “I misspoke yesterday in the Dáil and made a mistake in terms of how I articulated it.

He told the paper: “Essentially I was making the point that the shareholders...themselves weren’t bailed out.

“But obviously the banks, there was a huge rescue package for the banks, of course there was we know that, in terms of both protecting depositors and protecting bond holders.”

Mr Martin has come under increasing opposition pressure to correct the Dáil record in the wake of the €64 billion injection to the banks in 2008.

Tánaiste Leo Varadkar told the Dáil earlier that “there was a bailout of the banks 12 years ago” and agreed the Taoiseach misspoke when he said there had not been a bailout.

“The banks were nationalised or effectively nationalised,” the Tánaiste said, when challenged by People Before Profit TD Richard Boyd Barrett about comments Mr Martin made in the Dáil on Wednesday claiming that banks and their shareholders did not receive a bailout.

In the Dáil Mr Boyd Barrett said the Taoiseach had “entered a winter wonderland fairytale” in making that claim.

Mr Varadkar said the Taoiseach also “did correct himself very quickly in fairness in the Dáil yesterday. What he meant to say was that the banks’ owners, the banks’ shareholders were not bailed out.

“And those who owned the banks, those who had shares in the banks lost all or almost all of their money. Some were very wealthy people and some were not. “Some were just everyday people who bought bank shares as part of their pension and we need to bear that in mind.”

Mr Boyd Barrett asked the Tánaiste “to correct the Dáil record that there was in fact a bailout of the banks and it did cost the people of this country very badly”.

The Taoiseach on Wednesday told Mr Boyd Barrett that the banks were not bailed out when the Dún Laoghaire TD contrasted the treatment of the banks with that of the Debenhams workers.

The Tánaiste said that people sometimes seek to have their sectors bailed out like the banks. “What they often don’t appreciate is that would mean they would seek to own that sector.”