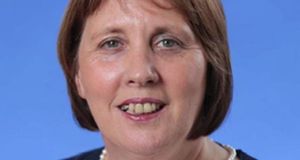 Ulster Unionist Jenny Palmer has called in police for assistance after coming under attack on social media after losing her seat in the Northern Assembly election.

The former DUP member and departing MLA switched to the UUP in 2015 along with her husband John.

She lost her Stormont seat in Lagan Valley last week.

Ms Palmer tweeted that she was feeling vulnerable.

Feeling vulnerable tonight! Sad some threaten democracy in ignorance. Thanks to PSNI for their support. Family 1st pic.twitter.com/80hpALhnrI

“Sad some threaten democracy in ignorance. Thanks to PSNI for their support. Family 1st.”

She had defected to the UUP following the Red Sky scandal after claiming she had been bullied.

She won a seat for the UUP in Lagan Valley at the last election, but lost out this time round.

UUP Assembly member Robin Swann also said she had been the victim of sustained attack on social media over her election result.

“I would actually ask those other politicians who have stoked up that anger to take a minute of time and reflect and possibly call on those who are attacking Jenny and John at this minute in time to take a step back and reflect on those comments,” she said.