Speaking in the Dáil, an Taoiseach, Enda Kenny, has denounced the era of mother and baby homes as a 'social and cultural sepulchre' 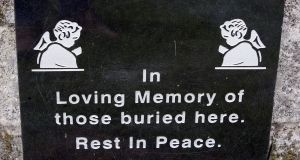 A plaque in Tuam, Co Galway, commemorates up to 800 children buried at the site of the former home for unmarried mothers run by nuns. Photograph: AFP/Getty Images 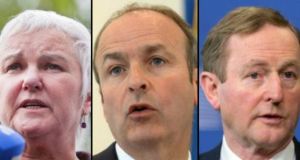 Taoiseach Enda Kenny has pledged to deal with the scandal of mother and baby homes in the wake of the discovery of significant remains in Tuam.

Mr Kenny, who described the mass grave at the mother-and-baby home as a “chamber of horrors”, told the Dáil that “we need some little time to reflect on the issue” and to allow gardaí and the coroner to deal with the situation.

He also described the era of mother-and-baby homes as a “social and cultural sepulchre”.

Mr Kenny said “we [had] better deal with this now” because if the Government did not, another taoiseach in 20 years would be saying: “If we only knew then, if only we had done then.’ But his or her then is our now.”

In his response to the discovery of the remains , Mr Kenny said: “We dug deep and we dug deeper still to bury our compassion to bury our mercy to bury our humanity itself.

“No nuns broke into our homes to kidnap our children. We gave them up to what we convinced ourselves was the nuns’ care.

The work of Catherine Corless brought to light 796 children's death certs relating to the home in Tuam. Here are all of their names #CBLive pic.twitter.com/oipboNTUNF

“We gave them up to spare them the savagery of gossip, the wink-and-elbow language of delight in which the ‘holier than thous’ were particularly fluent . . . We gave them up because of our perverse, morbid relationship with what you call respectability . . . For a while it seemed as if in Ireland our women had the amazing capacity to self-impregnate.”

AAA-PBP TD Bríd Smith called for the Bon Secours order of nuns, who ran the Tuam home, to be disbanded. She said its hospital “empire”, the biggest private hospital group in the State, “was built on the bones of the dead Tuam babies”.

Ms Smith said everyone was not responsible for what happened in Tuam. It was paid for by the State, which knew exactly what was going on, and there were “headage payments” of up to $3,000 for each child sent to the United States.

The mothers who were forced into homes “did not ask for them to be starved to death, to be neglected to death to be buried unbeknownst to them or to be trafficked to America”.

Fianna Fáil leader Micheál Martin called for the Taoiseach to confirm he intended to issue a formal State apology and for the terms of reference of the commission of investigation into mother-and-baby homes to be extended.

Sinn Féin’s Pearse Doherty called for the interim report by the commission to be published. He said the Minister for Children Katherine Zappone had received it in September.

Ms Zappone yesterday got Cabinet approval to initiate a scoping exercise to see how the terms of reference for the commission of investigation could be expanded. Her spokeswoman said the exercise would not begin until after the St Patrick’s Day break at the earliest.

The scoping exercise is expected to consider the feasibility of including another 180 institutions. The most likely way of expanding the terms of the inquiry, it is understood, is to carry out initial assessments of county homes that may have dealt with unmarried mothers and babies. In such a scenario, any entity that had not dealt with mothers and babies would be excluded.

The spokeswoman said it would done in consultation with the commission, but the details are of how it would be carried out would not be confirmed until the end of the month.