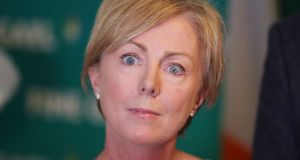 Regina Doherty: “Due to an error when collecting leaflets for distribution, four boxes were not collected by the distributors”

More than 400 boxes containing up to 486,500 newsletters produced at the taxpayers’ expense were binned after the TDs and Senators who ordered them failed to collect them from the Oireachtas print facility.

Among these was Minister for Employment Affairs and Social Protection Regina Doherty, who last week called for a printing cap to discourage wasteful use of the “free” facilities.

Speaking on Newstalk Breakfast following the revelation that over 300,000 personalised calendars and Christmas cards had been produced for TDs and Senators in the past year, Ms Doherty insisted: “We’re not all at it.”

She said a cap was required on the amount of printing that Oireachtas members could order “so you’ll actually value what you get printed, as opposed to just throwing in orders and not wondering where they [come] from”.

Records released under the Freedom of Information Act show that Ms Doherty placed an order for 22,000 six-page newsletters from the print facility in November 2018, four boxes of which were never collected.

A spokeswoman for the Houses of the Oireachtas said it is not possible to quantify the contents of each box. However, a spokesman for the Minister said they contained a total of 4,000 copies of the newsletter.

The Oireachtas print facility typically contacts the relevant TD or Senator a number of times regarding uncollected items before recycling them if they are left for more than three months.

Ms Doherty was among 28 TDs and Senators who ordered a total of 486,500 items during the past two years, but failed to collect either part or all of the consignment.

It emerged last week that elected representatives had used the “free” printing facility to produce almost 25 million items, including sympathy cards, bookmarks and calendars, in the past two years.

The cost of the materials used to make the 24,816,150 newsletters, posters, flyers and other printed documents was €599,655. This does not include the cost of running and staffing the print facility.

Criticising the apparently profligate use of the printing facility by TDs and Senators, Ms Doherty called on those responsible for generating the controversy to apologise.

“When something is wrong, when somebody has been caught doing something that’s wrong, own it,” she said. “Say you’re sorry and move on and make sure that it won’t happen again. Don’t be pointing fingers, ‘oh, they do it too.’ It’s ridiculous, absolutely ridiculous,” she told Newstalk Breakfast host Shane Coleman.

Referring to the newsletters that were binned by the print facility, Ms Doherty’s spokesman said: “Due to an error when collecting leaflets for distribution, four boxes were not collected by the distributors.

“The Minister’s office was not informed that there were remaining boxes and these were recycled by the Oireachtas. The majority of the leaflets ordered were collected and distributed [18,000].”

Other Oireachtas members whose printed material ended up in the bin at the print facility include Sinn Féin Senator Niall Ó Donnghaile, who failed to collect 90 boxes containing up to 80,000 newsletters.

Tánaiste Simon Coveney ordered 15,000 six-page newsletters in November 2018, 14 boxes of which ended up in the bin after he failed to collect them.

Fine Gael Senator Ray Butler placed an order for 20,000 similar newsletters on the same day, but failed to collect 21 boxes of the material.