The Irish Times view on Brexit: tactics and cliff-edges 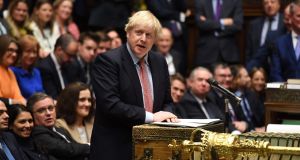 British prime minister Boris Johnson has said that the UK will not seek an extension to the time allowed for negotiation on a future relationship between the EU and the UK, and that doing so will be outlawed in the withdrawal bill. Photograph: Jessica Taylor/AFP via Getty Images

It would be a mistake to take Boris Johnson’s statements this week on his Brexit negotiating strategy as the final word. We have already seen how he can change course. He has now said that the UK will not seek an extension to the time allowed for negotiation on a future relationship between the EU and the UK, and that doing so will be outlawed in the withdrawal bill. This has not gone down well with the EU side – not that Johnson will care.

This decision could be reversed. But Johnson is sending a signal which should not be ignored. He is indicating that he wants to do a quick deal with the EU and this means – in the first instance – a narrow agreement covering largely trade in goods. And that, for now anyway, he will threaten to take the consequences of such a deal not being done in time.

The transition period is due to expire at the end of December 2020 and without an extension, there will not be time to do a wider deal which would also include services, data exchange, security cooperation and so on. Even achieving a narrow deal may be difficult. The EU will look for an agreement on fishing rights and a commitment that the UK will not cut standards in areas like the environment and workers’ rights. The UK has still to face up to the fact that the further it diverges from EU rules and regulations, the more barriers its businesses will face in entering EU markets.

These uncertainties mean fears of the UK leaving the transition period without a trade deal could rise throughout 2020. Another cliff-edge may threaten. The impact of this on Ireland would not be the same as the UK leaving without a withdrawal agreement, as there would be no need for Irish Border checks and controls. However it would lead to significant barriers on trade between Ireland and Britain.

This provides a busy agenda for the Government to input into EU trade talks and also to work in a separate EU/UK forum which will seek to finalise and implement the new arrangements on trade between the North and the rest of the UK.