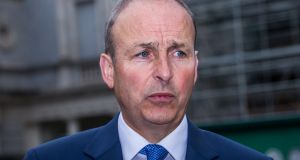 Fianna Fáil leader Micheál Martin would not commit the party to a promise to freeze rents. Photograph: James Forde

Fianna Fáil leader Micheál Martin has said there will be an “implosion” of the young in Irish society unless the housing crisis can be resolved.

Mr Martin identified housing as one of the two big issues for his party – along with health – in the run-up to the next general election.

He said the housing situation at the moment was just not sustainable and would have major ramifications for society if no solution could be found.

“There will be an implosion in our society if we don’t deal with the huge challenges that young people face today – in affording rent or in having a realistic prospect of being able to buy a house. Too much of their income is being eaten up by excessive rents. And the rents have gone too high and they have to be controlled,” he said.

“There has to be a dramatic increase in house building . . . We can’t do it in a piecemeal basis, we can’t do everything.

“But we’re going to sort this housing out and Fianna Fáil historically built the biggest estates of the past in swathes of Dublin, Cork, Limerick, Galway, which dealt with housing crisis of that era.”

Mr Martin was speaking in an interview with the media at the end of the autumn term of the Dáil. He said that housing was the one issue that had consistently come up on the doorsteps during the local elections – with people raising issues about homelessness, lack of housing, and young adults trapped in their parents’ homes because of high rents and unaffordable housing.

Mr Martin would not commit to any specific measure other than a commitment to give tax incentives to smaller landlords, to encourage them to rent out rooms, or a single dwelling they may not be using.

“There are many people with two houses, three houses, some who because of their own personal finances are renting out apartments or whatever. But they’re finding it difficult. And I think we’ve got to get that balance right, make sure that we have a steady flow of people into the market . . . I think there’s untapped potential there, as there is in rural Ireland in terms of utilising accommodation that’s not been fully used.”

The Fianna Fáil leader would not commit the party to a specific promise to freeze rents, saying it needed to consider all aspects of the problem before committing any measures to its manifesto.