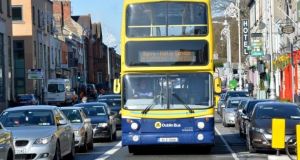 Dublin Bus may begin piloting electric vehicles in the capital for the first time later this year, the National Transport Authority (NTA) has indicated.

At present, the entire 950-bus fleet operated by Dublin Bus uses diesel. Unless the fleet begins to use cleaner technology, the State-owned company will struggle to meet its targeted 33 per cent reduction in emissions after 2020.

In 2015, a funding request from Dublin Bus to trial three hybrid buses, which combine electricity and diesel, over three years was rejected by the NTA on the grounds of cost. It would have cost €1 million to lease the hybrid buses.

However, in a letter to Labour’s Dublin spokesman Kevin Humphreys this month, the NTA confirmed it was finalising its policy, in conjunction with the Department of Transport, for bus fleet technology and would then begin a procurement process for the selected vehicle type.

“[This] may include a pilot scheme involving electric buses,” the letter stated, adding that the matter would be “determined in the coming weeks”.

The NTA did not provide information on whether it anticipated the buses would be hybrid or fully electric.

Hybrid and hydrogen fuel-cell buses are used in other European capitals in an effort to reduce emissions.

Almost 3,000 of London’s 9,500 buses are hybrid. There are 73 fully electric buses, including double-deckers, as well as 10 hydrogen fuel-cell buses.

Paris has also begun to introduce fully electric buses with 60 introduced since 2016, as well as 255 biogas buses.

The NTA, in the letter, seemed to rule out compressed natural gas, saying that recent research has concentrated more on electric buses.

It also argued that its more recently acquired diesel buses are vastly cleaner than their predecessors, and produce much lower levels of diesel particulate matter.

While hybrid buses are far more efficient than conventional diesel models, they can cost as much 50 per cent more than standard buses.

Responding, Mr Humphreys, who is based in Dublin Bay South, told the NTA: “I would hope to see a pilot project up and running this year. There is a need to train staff, including diesel mechanics, to deal with electric engines.

“Electrification of the fleet will mean a reduced carbon footprint, as well as the reduction of particulates from diesel.

“We need to follow Paris and London and start soon, or else we will never reduce emissions and have clean public transport in our capital.”

The electric buses used in both capitals have a range of 180 kilometres between charges. Mr Humphreys argued they would be ideal for shorter cross-city routes.