Support for repeal will fall in campaign, anti-abortion group says 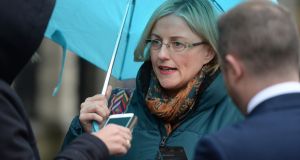 Cora Sherlock said the debate had not begun and the case for retaining the Eighth Amendment has not been heard. Photograph: Dara Mac Dónaill/The Irish Times

The anti-abortion campaign has insisted that the current strong support for removing the Eighth Amendment of the Constitution will fall over the course of a referendum campaign.

An Ipsos/MRBI poll for The Irish Times shows 56 per cent of people favour changing Article 40.3.3 of the Constitution and allowing for abortions up to 12 weeks.

According to the poll, 29 per cent of people oppose changing the Constitution, while 15 per cent are undecided or did not have an opinion.

Spokeswoman for the Pro-Life Campaign Cora Sherlock said the figures will change when people have an opportunity to consider the question they are being asked.

Ms Sherlock said the debate had not yet begun and the case for retaining the Eighth Amendment has not been heard.

“When this happens, I am confident that the polls will move in a pro-life direction.

“The stand out feature of the Eighth Amendment is that it has saved tens of thousands of lives. If it is repealed or replaced, it will inevitably lead to more abortions, which means more babies will lose their lives. That’s the stark reality of what we face in this debate.”

Poll respondents were told it was likely the Government would seek to legislate for abortion to be available on request up to 12 weeks. They were also told that in order to legislate for this, the Constitution needed to be changed in a referendum.

A clear majority of all voters said they would vote in favour of the constitutional change.

When undecided voters are excluded, 65 per cent favour repeal and abortion being allowed up to 12 weeks while 35 per cent do not.

Speaking after the results of the poll were confirmed in The Irish Times on Friday morning, People before Profit TD Bríd Smith called on Taoiseach Leo Varadkar to outline his position.

Ms Smith said the results made it clear that access to abortion on request up to 12 weeks is not a step too far for the majority of people.

Ms Smith added: “It may be too much for Varadkar’s own conservative instincts but not for the majority of voters.

“It is time to move on and hold a simple repeal referendum in May and for the antics and delaying tactics by some TDs in the Dáil to stop. It is time the people had their say.”

You can track the views of TDs and Senators on abortion by using our opinion tracker.